September is National Honey Month and Texas bees are celebrating a new state law that will lighten the regulations placed on small scale beekeepers. 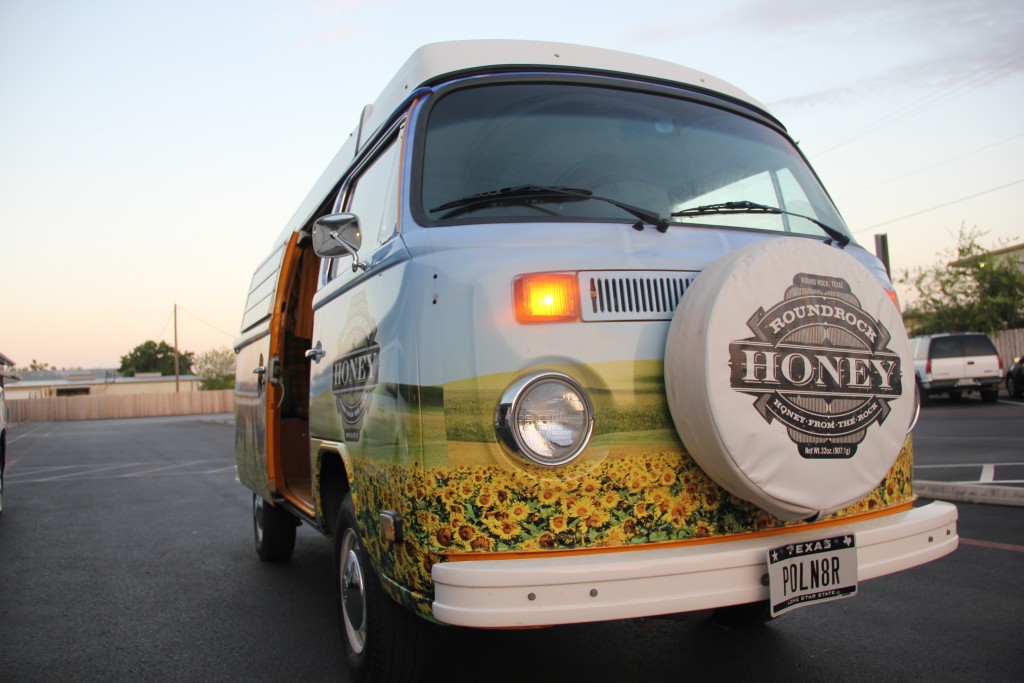 Round Rock Honey drives from hive to hive in style with their decorated van and personalized license plate. The family-owned and operated business not only produces the purest of wildflower honey but also educates future beekeepers and the general public. Photo by: Erin MacInerney

To bee or not to bee, won’t be a question anymore for bee hobbyists producing under 200 gallons of honey annually. The new Texas statute means they will be exempt from costly state health licensing requirements other larger manufacturers face.

The queen bee of honey, Hayden Wolf, thinks this will increase honey production around the state. As the 2015 American Honey Princess, Wolf represents Texas all around the nation advocating the importance of bees in keeping our ecosystem humming perfectly.

“This new law helps my family and I because we have always wanted to sell our honey,” Wolf says. “It’s a great opportunity for beekeepers.”

The 19-year-old manages 12 hives with her parents in East Texas but does not produce enough honey or have the time to make a business out of it.

The new law would allow beekeepers like Wolf and her family to sell their honey directly to consumers at farmers markets or small venues as long as proper labeling distinguishes their product from those bottled in inspection facilities. 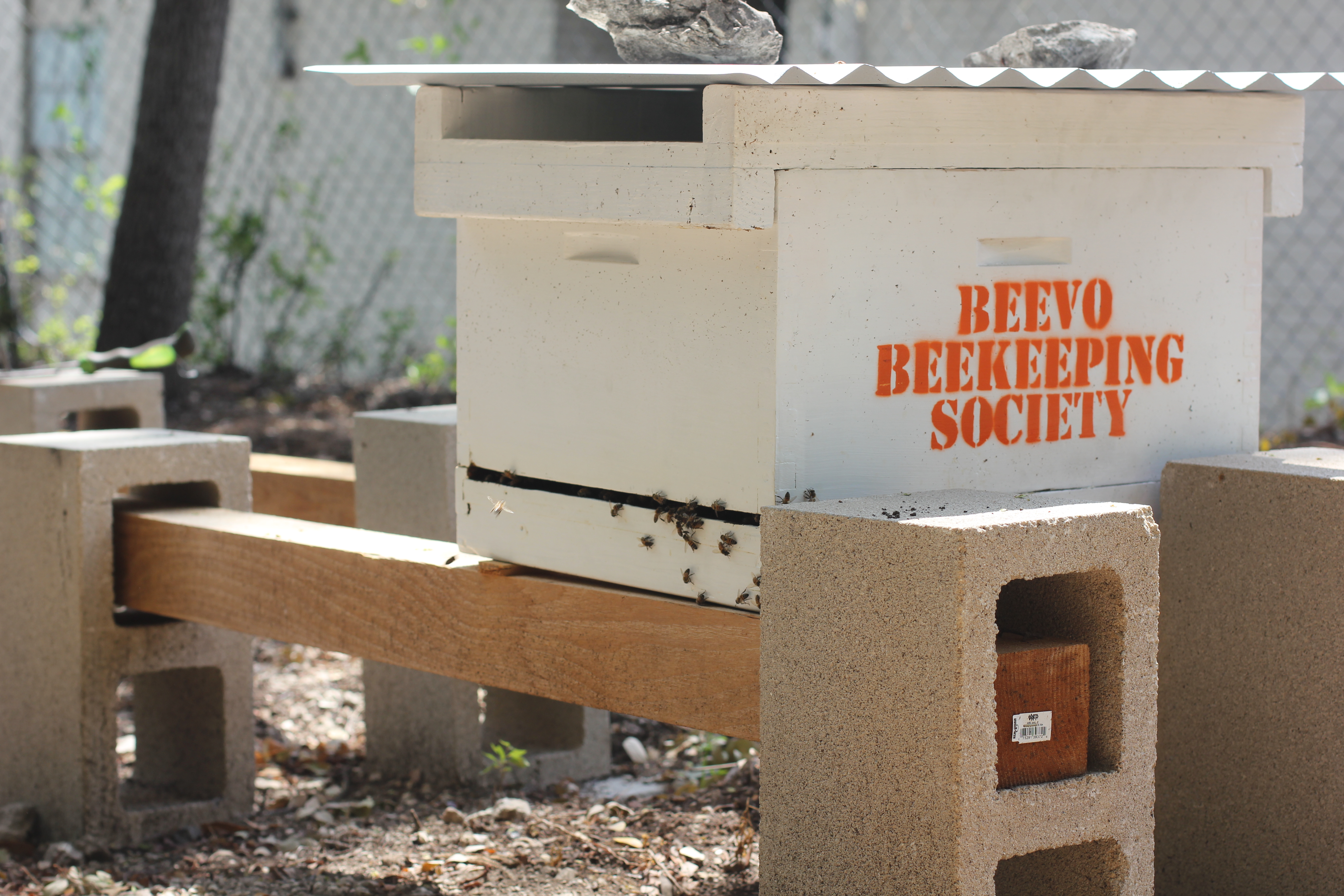 The BEEVO Beekeeping Society installed their first hive on UT's campus in Spring 2015. Melanie Brown and the rest of the club look forward to growing the hive in the future. Photo by: Morgan Bridges 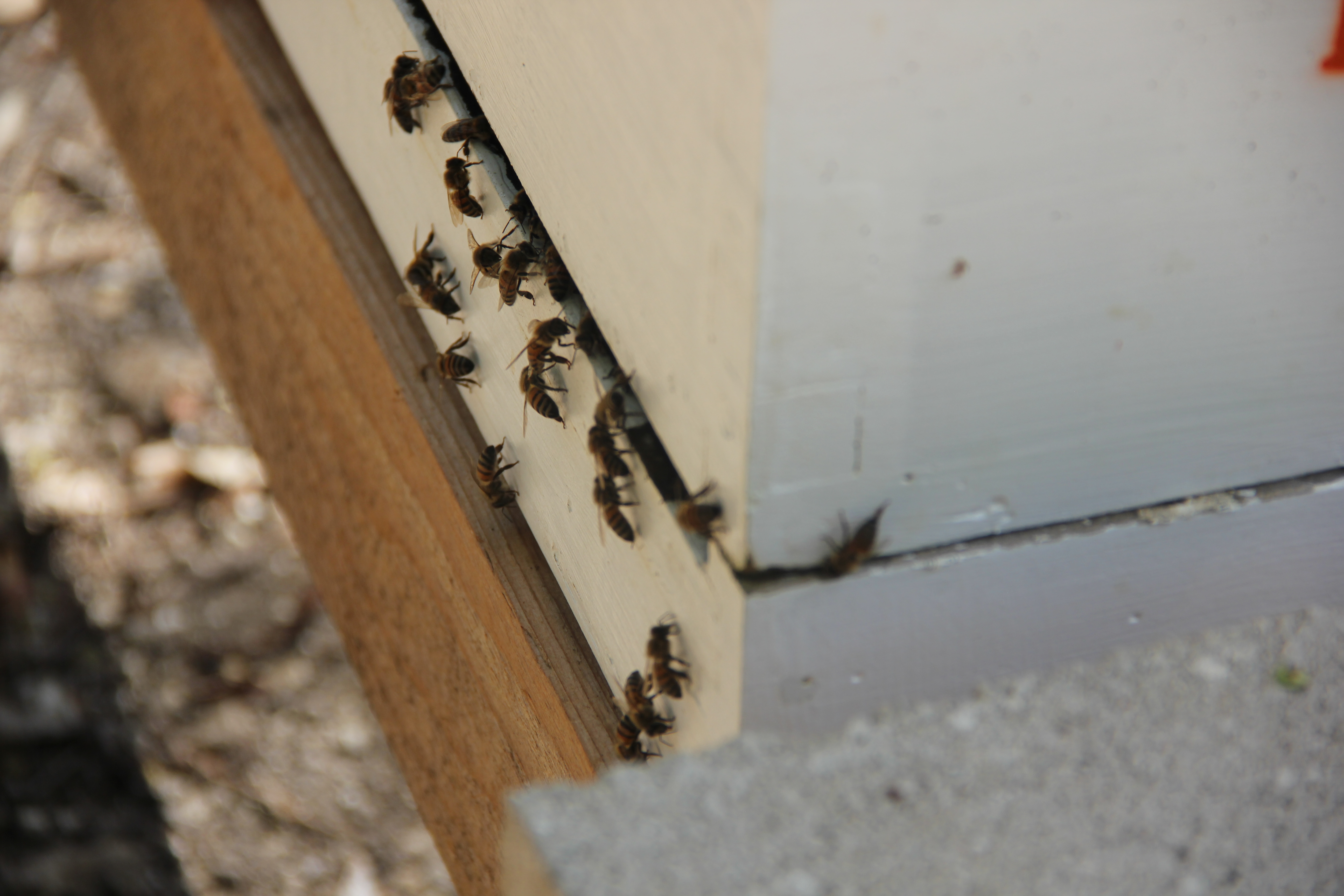 The University of Texas' very own bee population buzzes around the hive. The BEEVO Beekeeping Society uses the hive for educational purposes rather than harvesting its honey. Photo by: Morgan Bridges

A member of the BEEVO Beekeeping Society hoes the ground surrounding the hive to make room for a new herb garden. The plants not only decorate the grounds but also serve an important part of a bee’s life: pollination. Photo by: Morgan Bridges 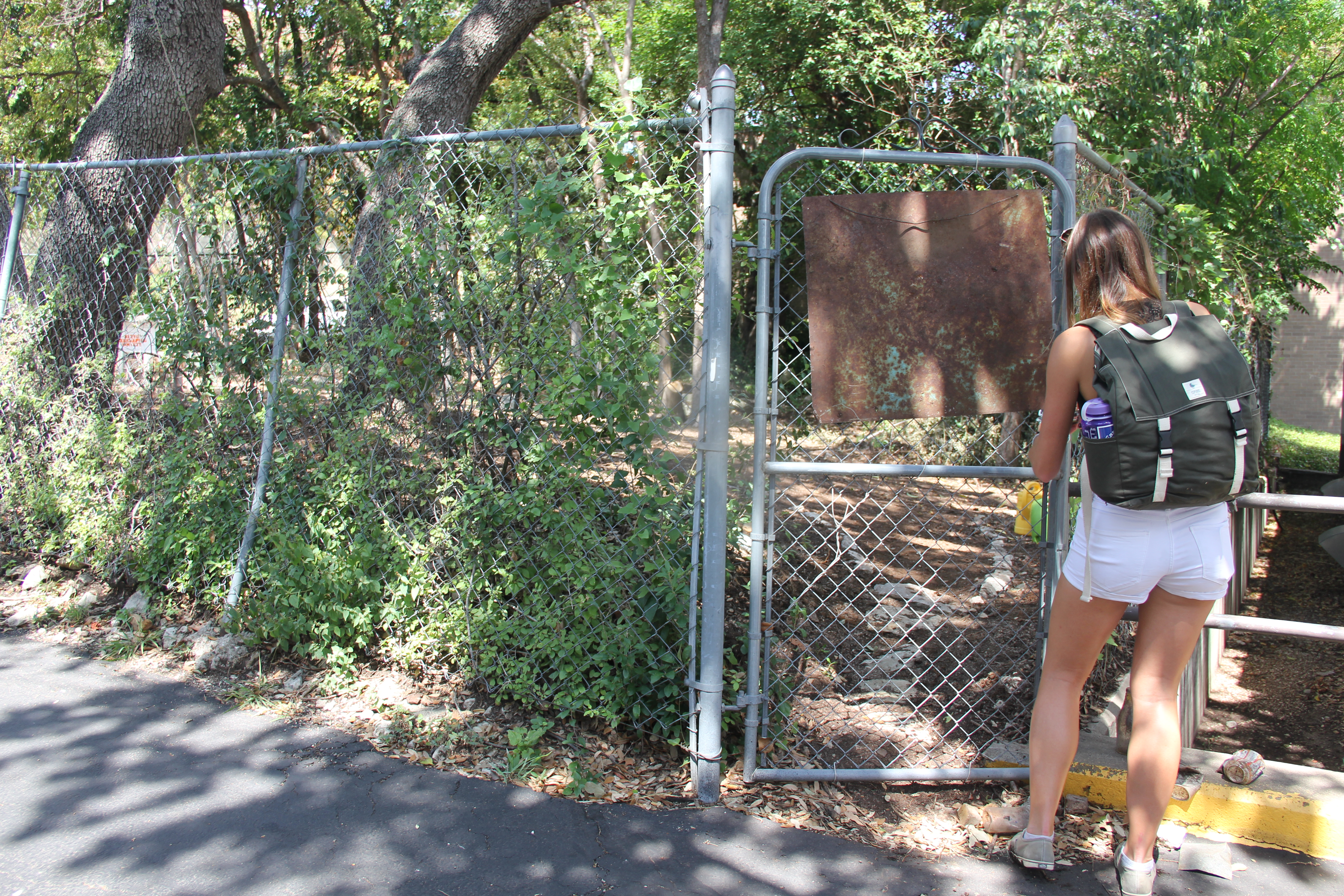 Co-founder of the BEEVO Beekeeping Society, Melanie Brown locks the entrance to the hive's south campus location. Before the student group re-landscaped the grounds, the hive location was an abandoned construction site. Photo by: Morgan Bridges 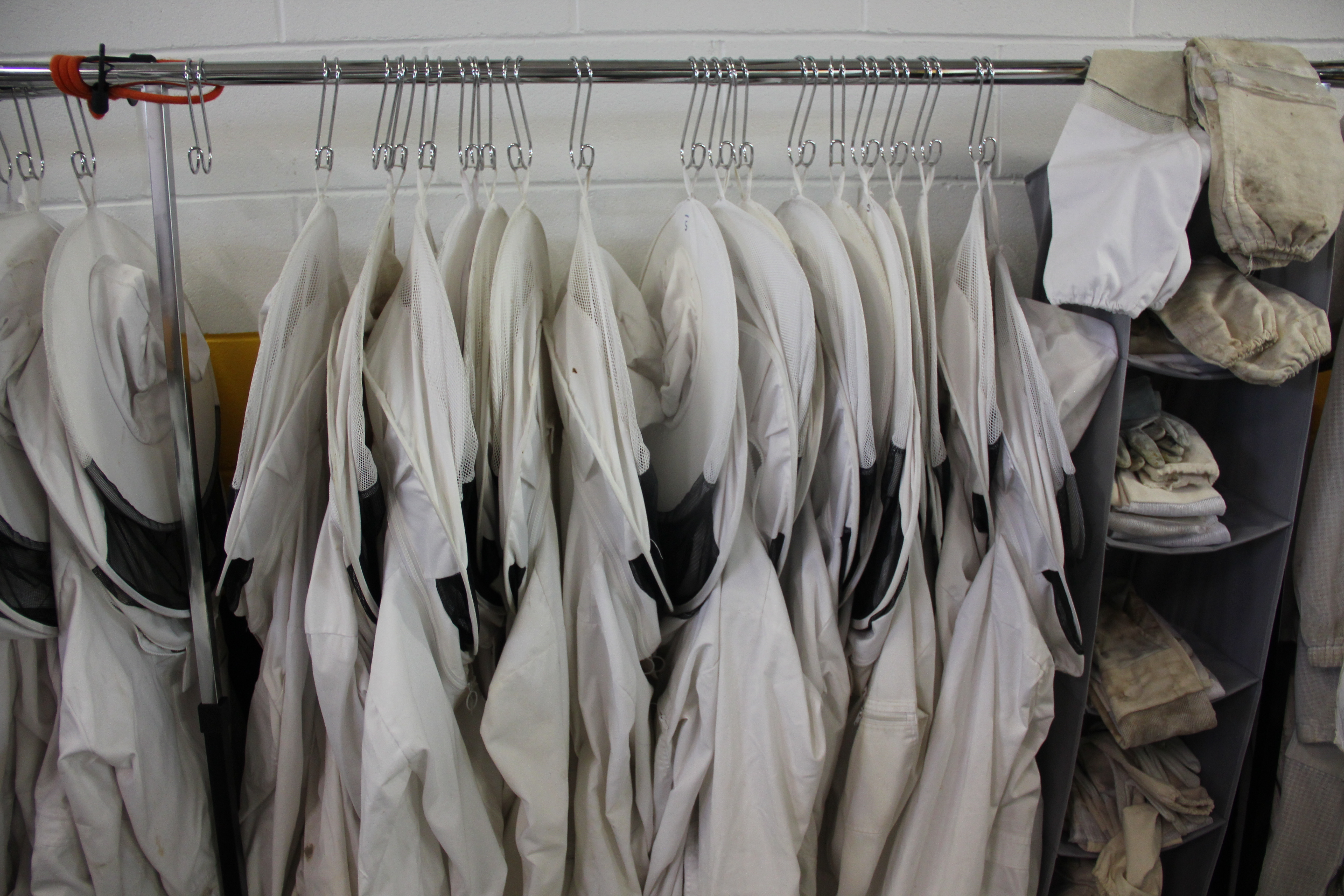 Various sizes of beekeeper suits can be found in Round Rock Honey's facility. As part of the beginning beekeeping course, students are given the opportunity to wear a bee suit and gain hands-on experience. Photo by: Erin MacInerney 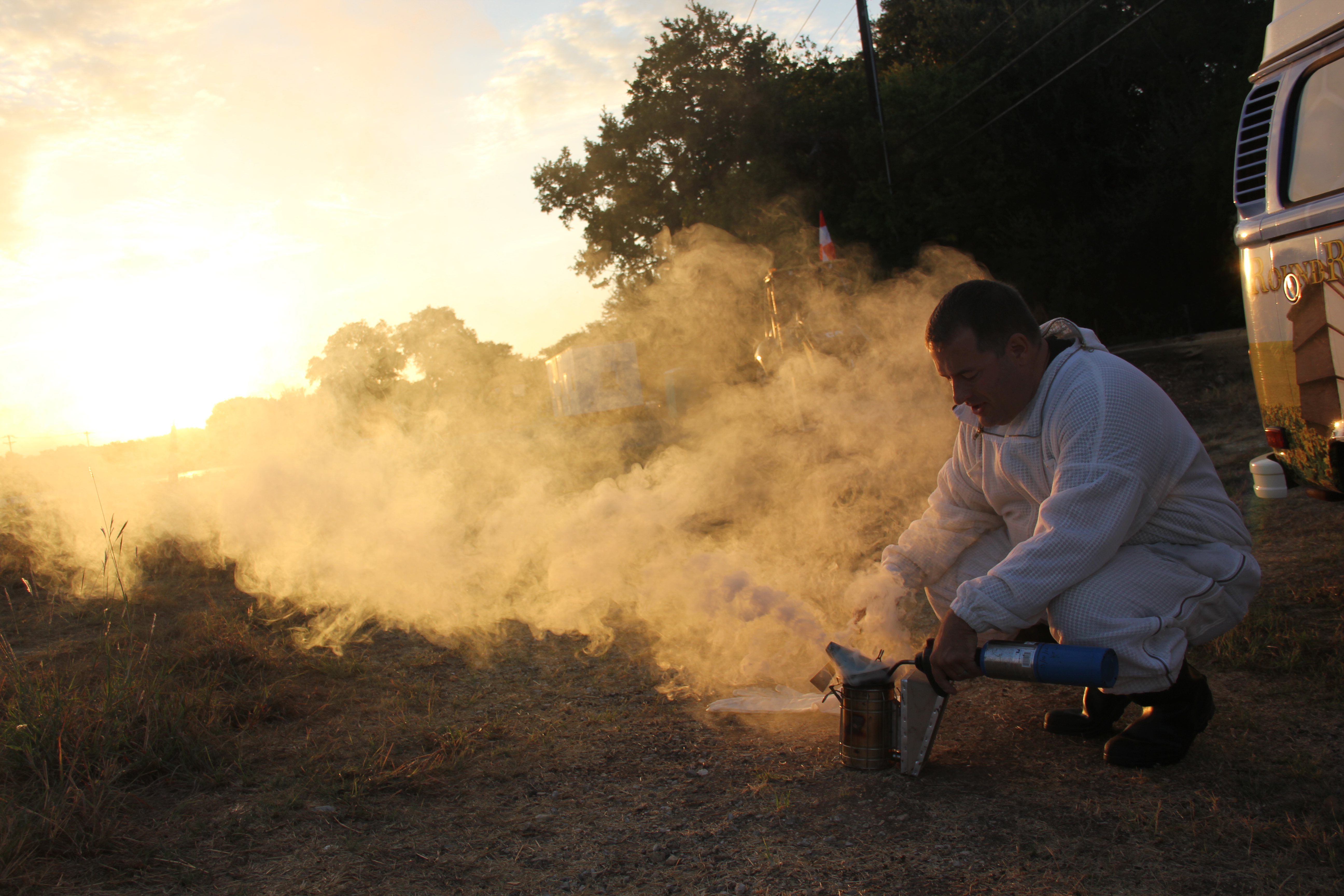 Owner of Round Rock Honey, Konrad Bouffard uses a bee smoker before checking the hives. Smoke is used to calm the bees and to disrupt the hive's normal defensive response. Photo by: Erin MacInerney 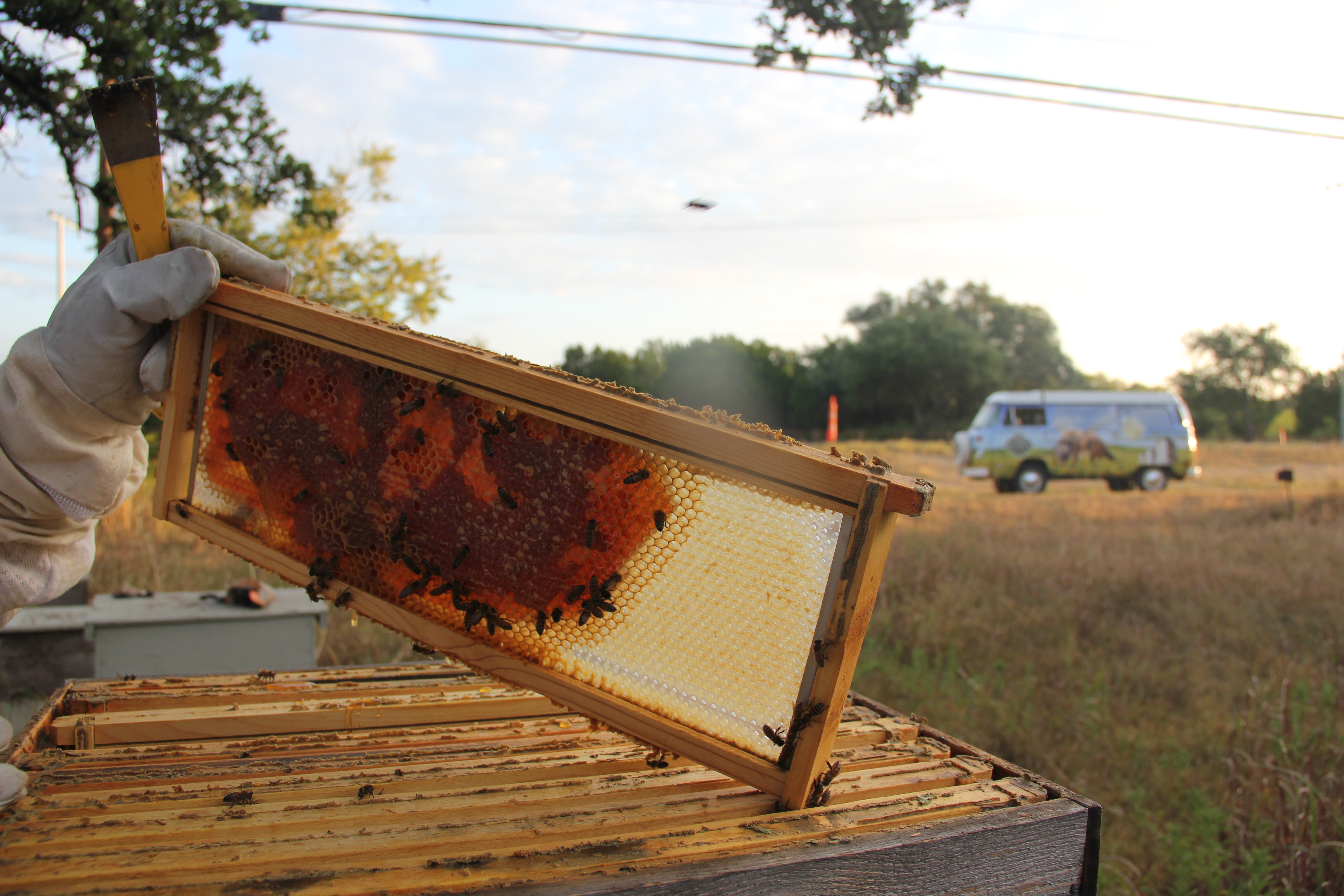 Bouffard shows one of the hive's honeycomb trays. He explained that in a good season, one hive could produce approximately 20 to 30 pounds of honey. Photo by: Erin MacInerney 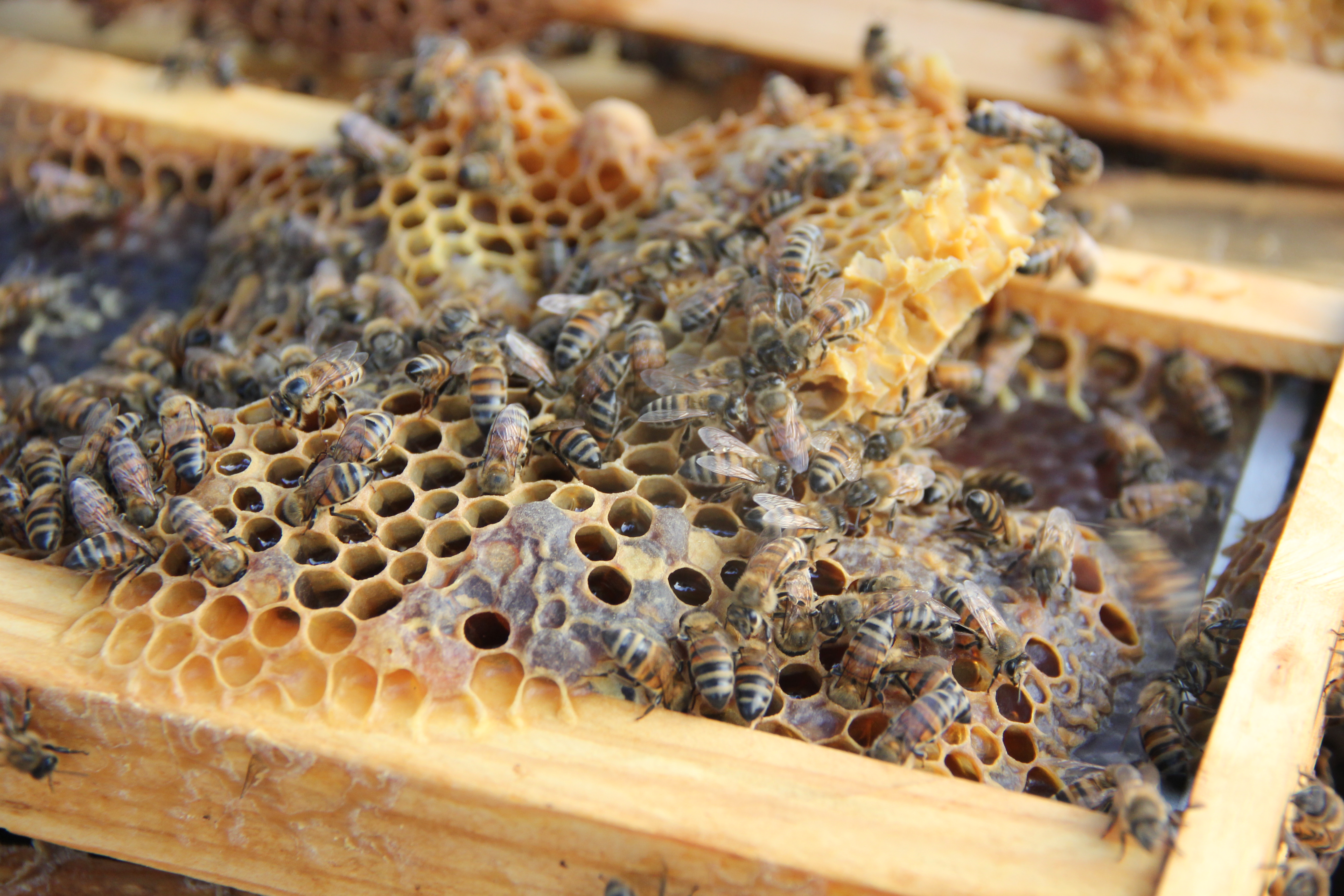 Bouffard gives a close up look of the bees attending to their honeycomb. These bees are part of one of the many bee yards spread across Central Texas used to produce Round Rock Honey. Photo by: Erin MacInerney 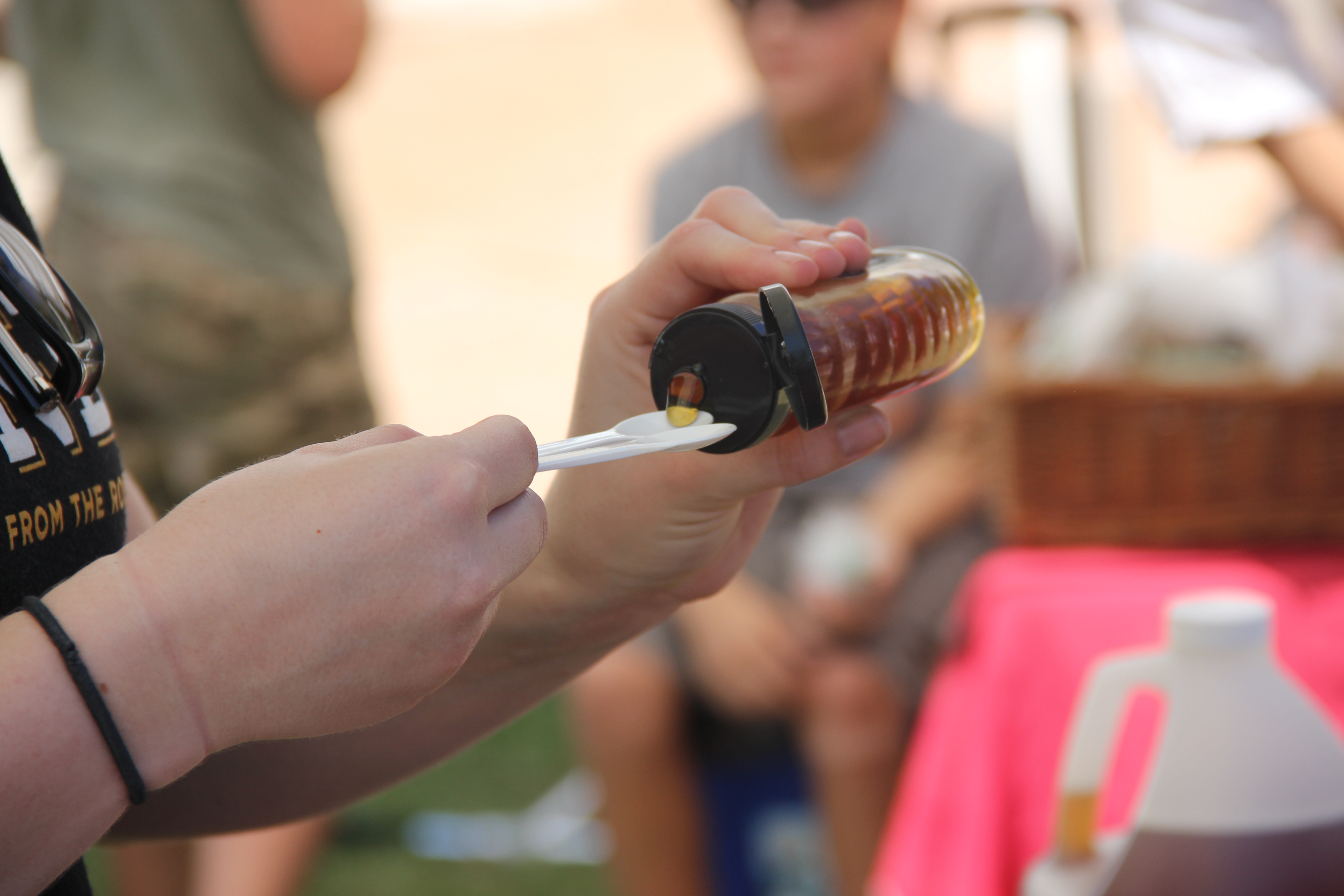 Round Rock Honey gives samples of their 100% all-natural wildflower honey at a farmer's market in Austin. The honey is described as having both a spicy and sweet taste. Photo by: Erin MacInerney 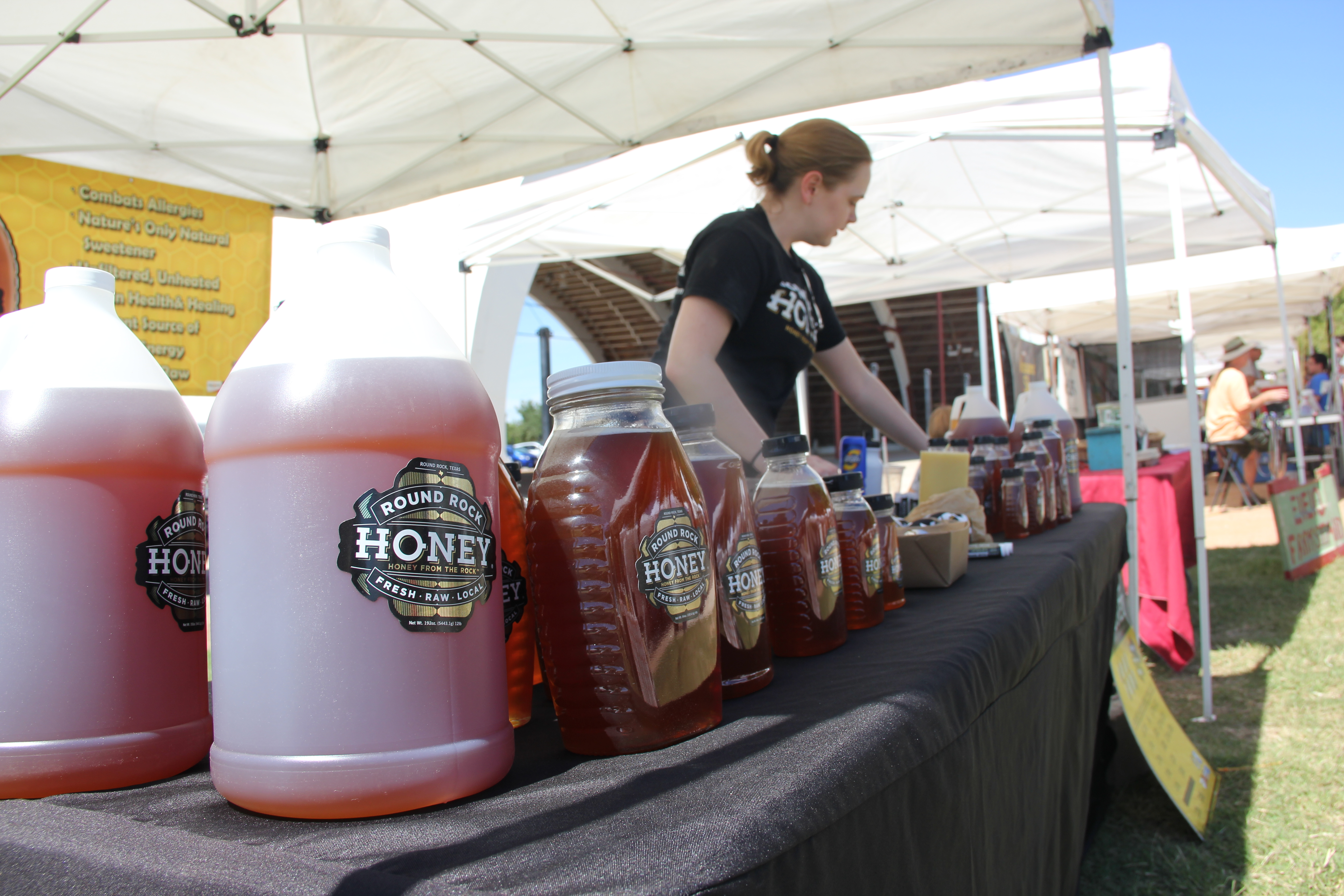 Carla Jenkins tends to the Round Rock Honey booth at a farmer's market in the Mueller community on Sunday. These markets are held every Sunday from 10 am to 2 pm. Photo by: Erin MacInerney 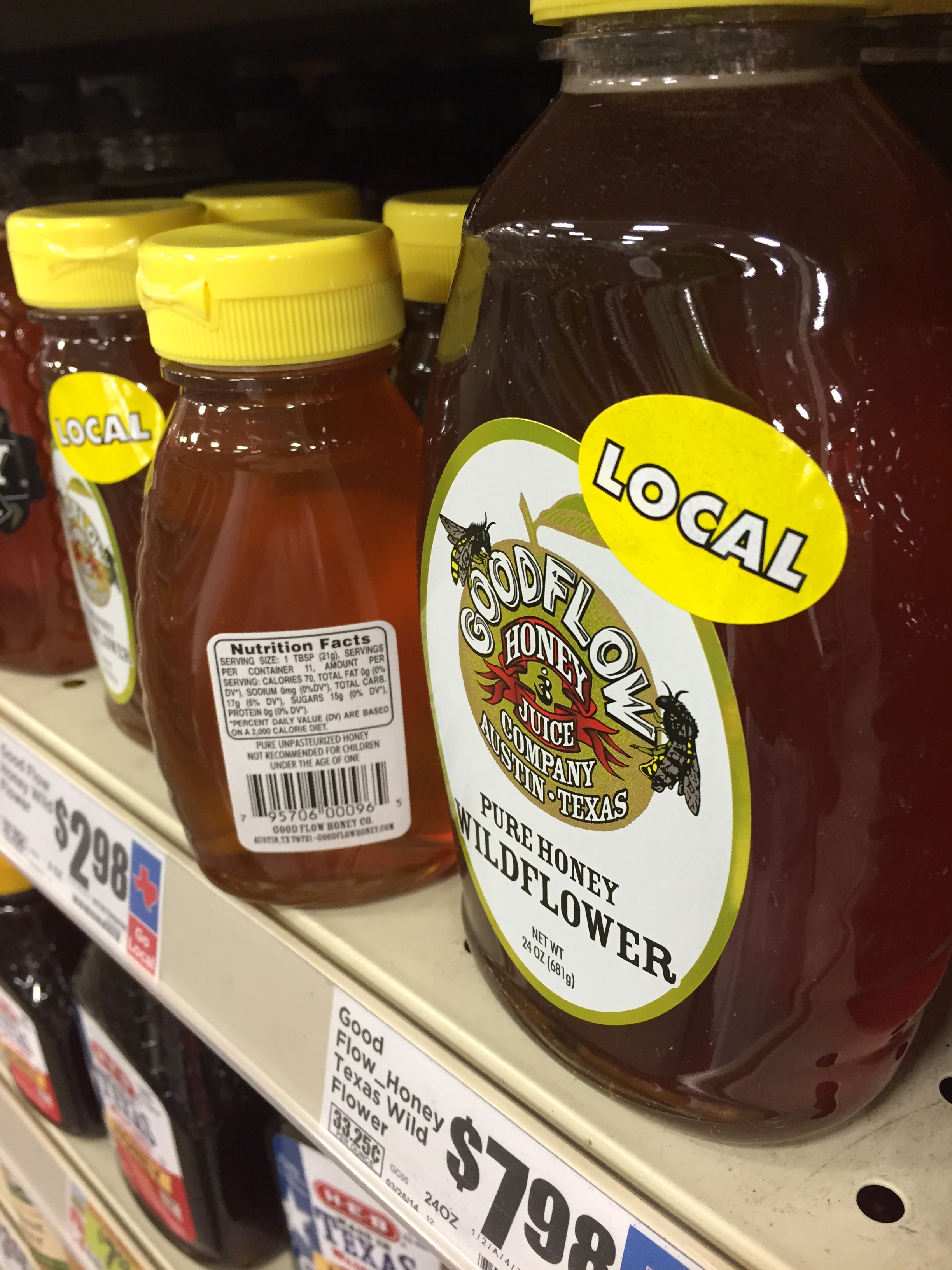 Many brands of locally produced honey are available for purchase in Austin grocery stores such as HEB and Whole foods. Photo by: Morgan Bridges

Bee enthusiasts say the warm Texas climate is a haven for raising honey bees.  Many keepers from Northern states bring their hives to Texas during the winter months.

“It’s a lot easier than getting a pet,” Wolf says. “You don’t even have to take them on a leash and walk them everyday!”

If you are concerned with getting the proper vitamin bee from your honey, don’t let that adorable bear-shaped bottle at the supermarket fool you.

Pollen studies conducted by Professor Vaughn M. Bryant of Texas A&M University found that over 75 percent of honey sold at large chain stores and restaurants had the pollen removed making it impossible to trace the legitimate source or ingredients.

Take a look at a jar of honey and you might find ingredients such as high fructose corn syrup and other artificial sweeteners. What you won’t see on the label are antibiotics, heavy metals and other harsh chemicals that could have contaminated the honey throughout the process.

The new law encourages sales of local honey which means a higher chance of consuming 100 percent, organic honey without the cheap additives.

“There are many benefits of honey and if you are not getting the pure product, you might not be getting those benefits,” Wolf says. “The best way to know you are actually getting the best honey is to know your beekeeper personally and ask them questions.”

Texas ranks sixth in the nation for honey production, but our bees still face major threats of disease, negative effects of pesticide use and global warming.

“It’s a fairly simply hobby but it has become harder to keep our bees alive in the past years. Now we have to check the hives every two to three weeks,” Wolf says. “It used to be easier in the old days.”

Mystery syndromes not fully understood such as Colony Collapse Disorder have created quite a buzz in the last decade. Annual bee colony losses averaged around 42 percent this past year according to a study conducted by the Apiary Inspectors of America.

“It is important we try to keep them alive, to keep ourselves alive,” says Melanie Brown, Founder of BEEVO, The University of Texas’ Beekeeping Society. “Bees pollinate a lot of our crops and without them, we would have a serious shortage of food.”

About 80 percent of the food on grocery store shelves are there thanks to bees according to the International Bee Research Association.

Brown says the BEEVO club has a substantial following since initiating this last spring.
The goal of the society is to engage students, faculty, and staff in urban beekeeping as part of an effort towards sustainable pollinator populations.

“I’m more passionate about the environmental impacts of beekeeping but there are a lot of people on campus who are just super into beekeeping,” Brown says. “I am happy they now have an outlet to share their knowledge.” 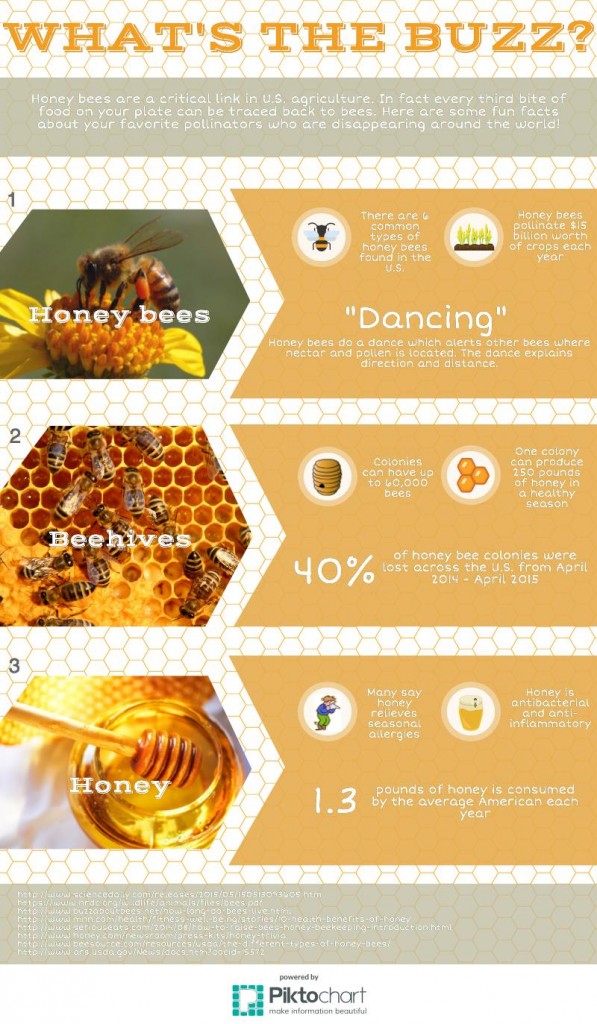