Oct. 14 Food and Culture Comments Off

If a bug has ever flown into your mouth, chances are it was an unpleasant experience… but there’s a movement in Austin that’s trying to turn that around.

Entomophagy is the practice of eating insects. Startup company Hopper Foods, restaurant La Condesa, educational nonprofit Little Herds and other groups are working to normalize entomophagy in Austin to promote sustainability and a healthy alternative protein. 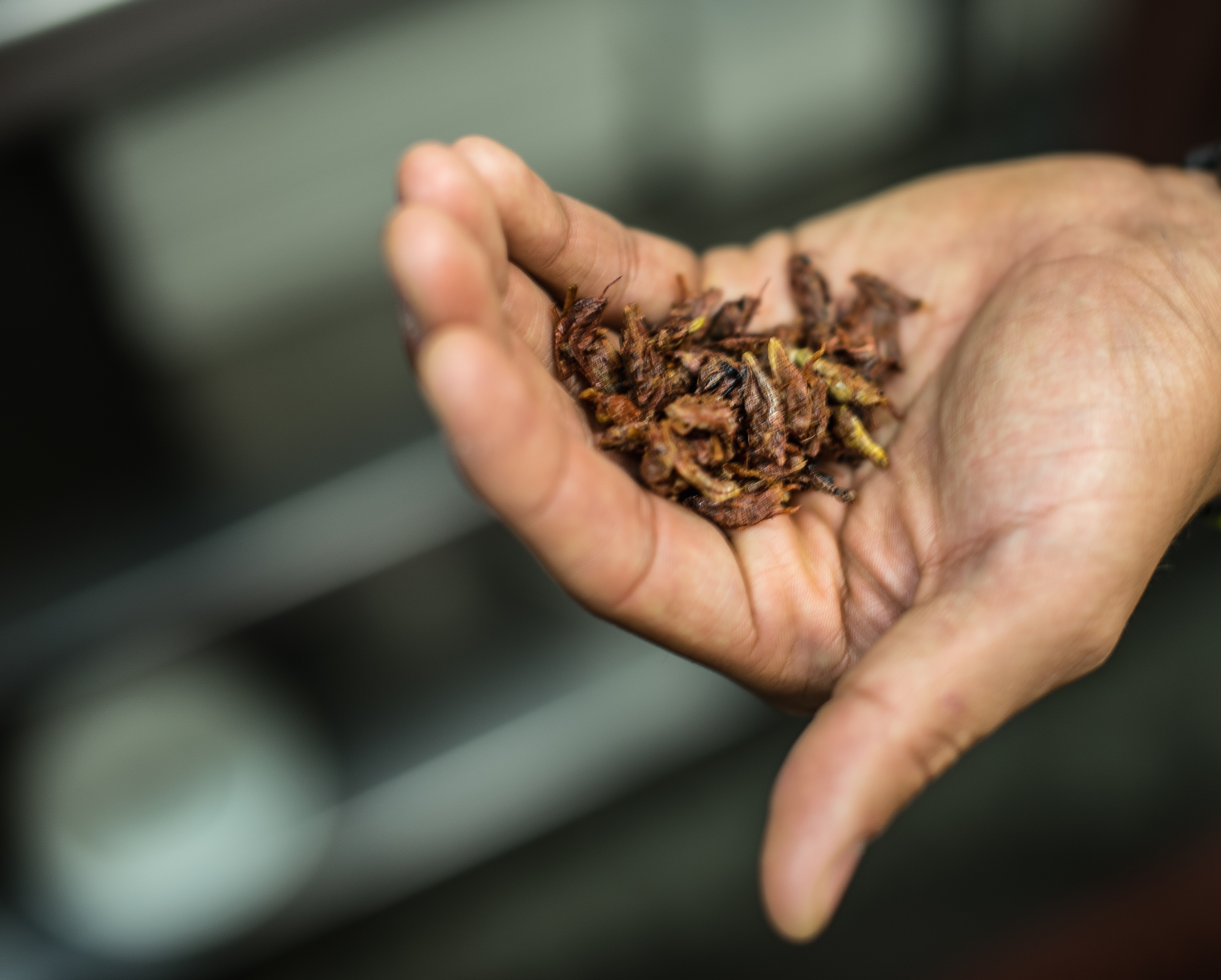 Hopper Foods makes energy bars with ground crickets – exoskeleton and all – and other all-natural ingredients. The company currently only sells the bars online and at in.gredients on Manor Road, but they plan to roll out to more locations starting as early as next month, said Founder and CEO Jack Ceadel.

“We have been amazed by how receptive people are,” Ceadel said. “I’m assuming that’s, you know, partly an Austin thing. We’ll see how people in the Midwest deal with the idea.”

Ceadel estimated that 10 percent of people totally refuse to try the bars, but 40-50 percent give them a “straight yes.” It’s the ones in the middle, he said, that they’d like to target and persuade.

“This is an entry level product,” Ceadel said. “We’re not asking you to take the whole cricket and put it in your mouth and chew it up.”

At least not yet.

The goal right now, he said, is getting people desensitized to the idea of entomophagy and educating them about its benefits. Crickets are nutrient rich, containing 68 percent protein by weight, all nine essential amino acids and other nutrients such as iron and calcium. They are also sustainable: it takes just one gallon of water to produce one pound of cricket protein, compared to 1,000 gallons for beef and 600 for pork.

So far Ceadel and company are only selling bars made with “cricket powder,” but they have a list of products they plan to roll out in the not-so-distant future that will start masking the bugs less and less.

“If you look at the way sushi and other things are mainstream the way they weren’t, you know, 50 years ago, I think that this will be very, very mainstream in five years,” he said.

La Condesa on Second Street is ahead of the curve. The Mexican restaurant began serving their seasonal chapulines – fried grasshopper tacos – in late September. Executive Chef Rick Lopez wasn’t sure what to expect, but was “blown away” by the positive reception after selling out within two hours on the first day.

“I didn’t want, like, bros coming in and just saying ‘Nah, we didn’t like them. It was just a dare.’ I really wanted people to eat them, and every single dish that came back was empty,” Lopez said. 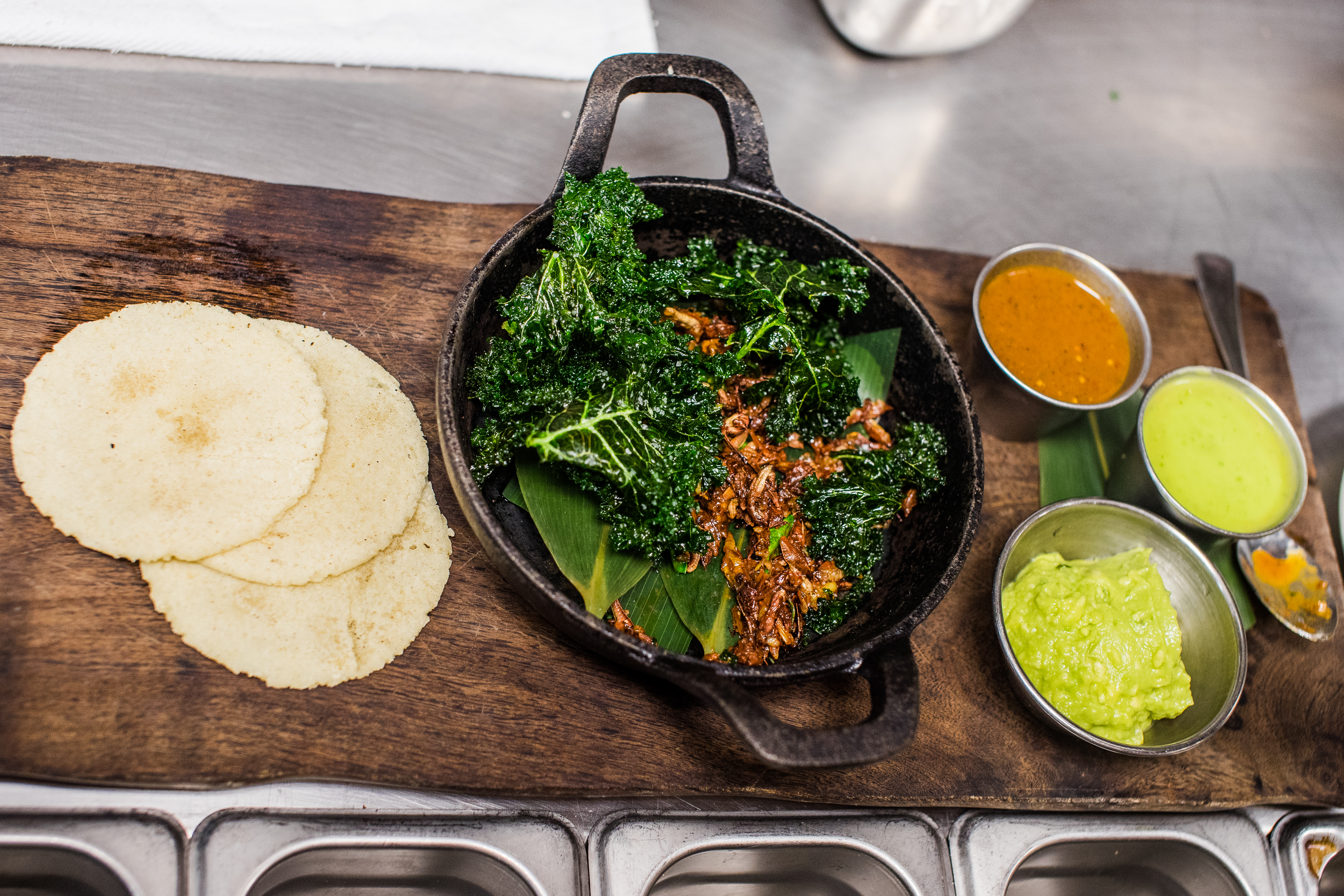 Kale covers the grasshoppers to represent how they are harvested in Mexico. “When you dig grass away the little bugs start jumping up…that’s how they get harvested,” explains chef Rick Lopez. Photo by Andrew Masi.

The restaurant gets the grasshoppers whole, clean and boiled like “little tiny lobsters,” and treated with toasted garlic, salt and lime juice, he said. They come from Mexico, which in Lopez’s opinion is exactly as it should be.

“We’re just kind of paying homage to Oaxaca and Mexico City where people eat this stuff everyday,” he said.

The total cook time is less than a minute. Lopez heats a pan and adds chopped raw garlic. He then adds the grasshoppers with some lime juice and epazote, a Mexican herb. He serves the dish “build-your-own” style with homemade corn tortillas, guacamole, salsa verde and chipotle sauce on the side. He uses the dish’s presentation to play on the grasshoppers’ natural habitat, covering the skillet of bugs in fried kale to simulate grass.

“So what we tell the tables is when you move back the kale – you move your grass away – you find the little bugs underneath living close to the wet mud, you know,” Lopez said. “Where they want to be.” 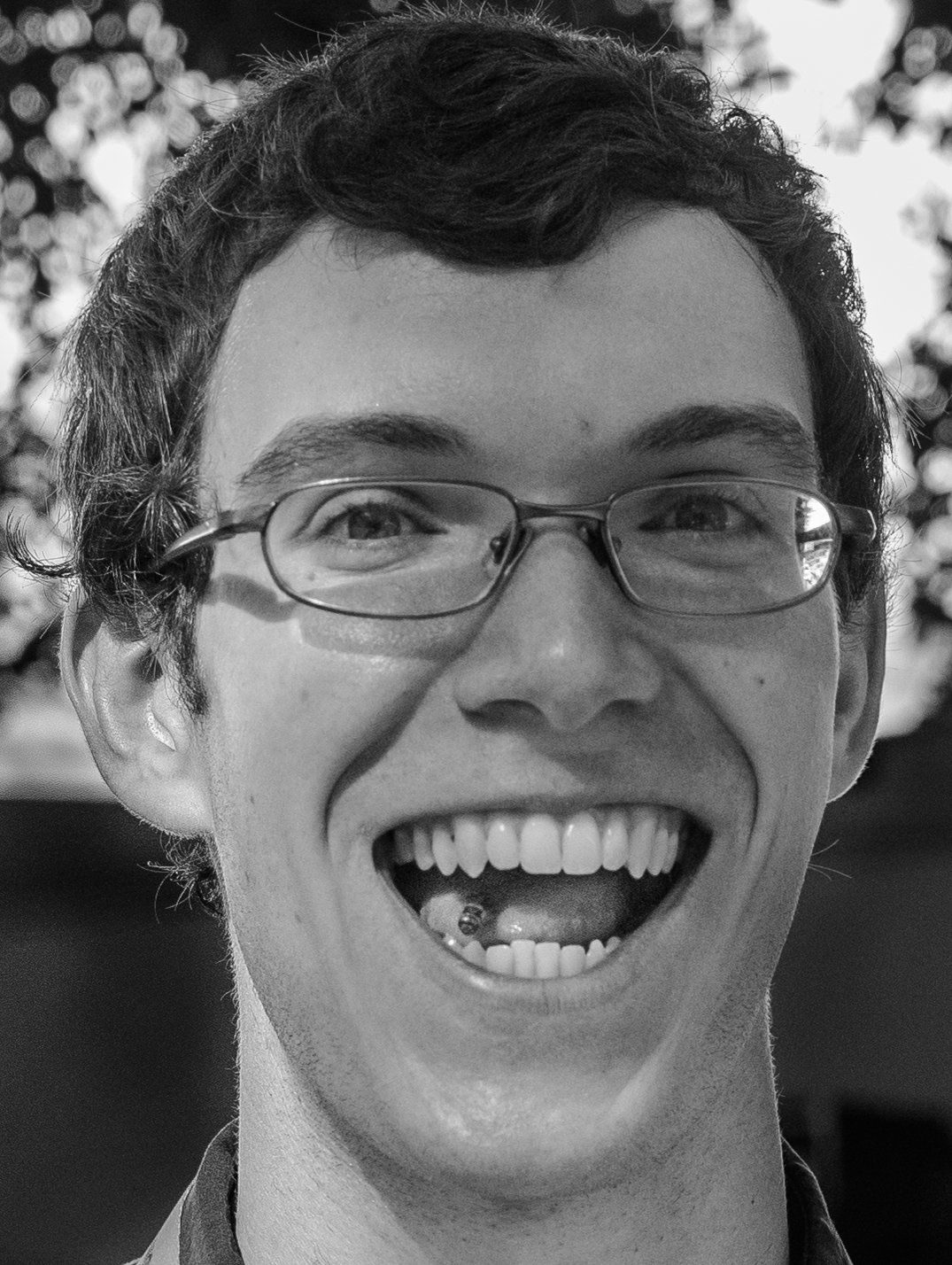 Focusing on where bugs want to be is also important to Little Herds founder Robert Nathan Allen. Little Herds is an Austin-based educational nonprofit that works to promote ethical insect farming.

“Insects can be raised in environments that are preferable. They like dark, teeming, cramped conditions,” Allen said. “They have abundant food, they don’t have natural predators, they don’t have to worry about parasites and diseases.”

People who are vegetarian for health or environmental reasons are likely to support the idea because insects offer a sustainable and healthy protein alternative to red meat, Allen said. It is also a good option for those who are vegetarian for ethical reasons, he said, because they are killed painlessly: they simply lower their body temperature until they die peacefully in their sleep. He acknowledged that vegans and “philosophical” vegetarians are not their target audience due to their perspective on animal life and consumption, but that doesn’t mean these groups shouldn’t support entomophagy as a movement.

“I think there’s a lot of gray area there that insects have a really good role in,” Allen said. “And even if you’re not willing to eat insects, I think everybody should be on board with the idea of more people eating insects.” 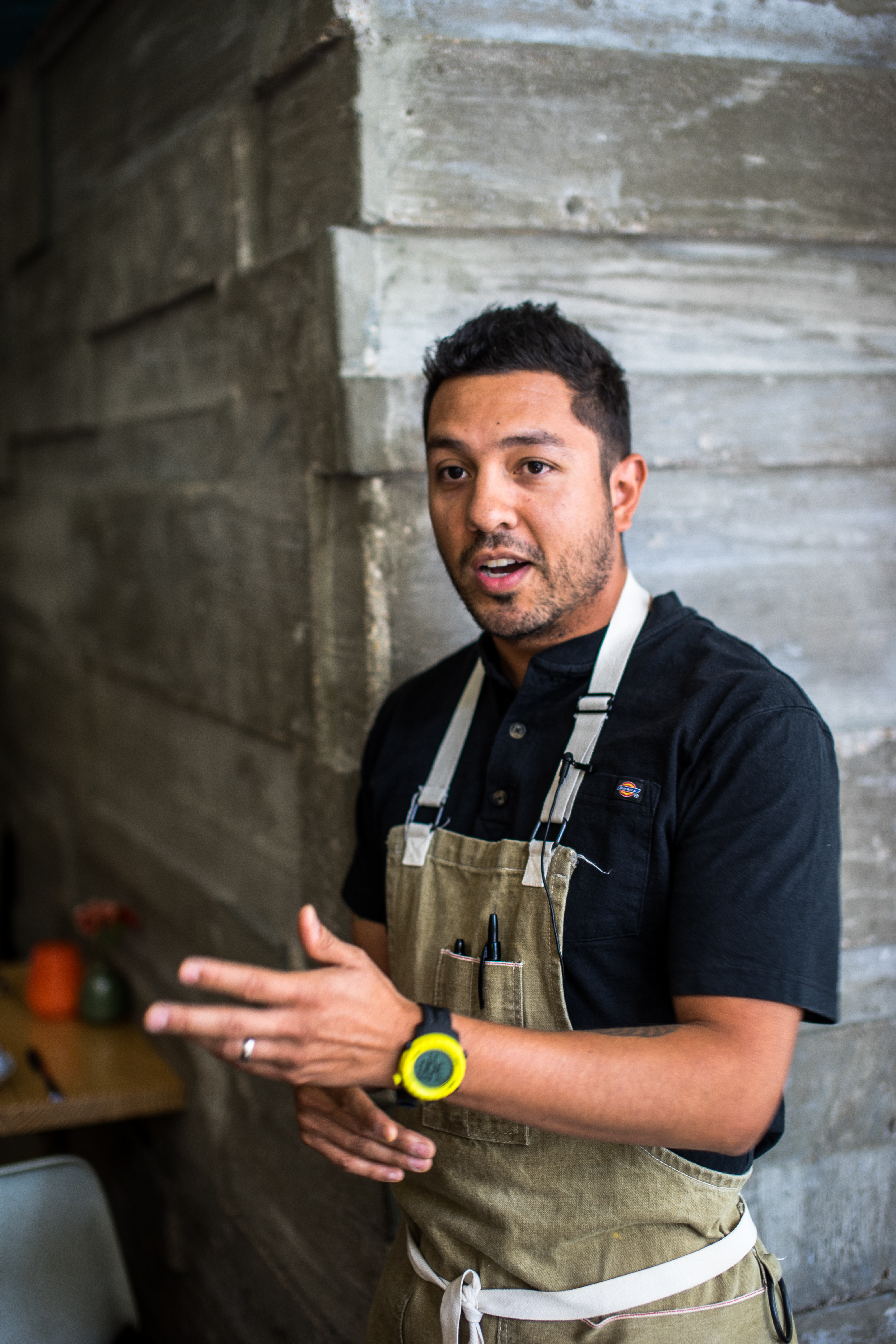 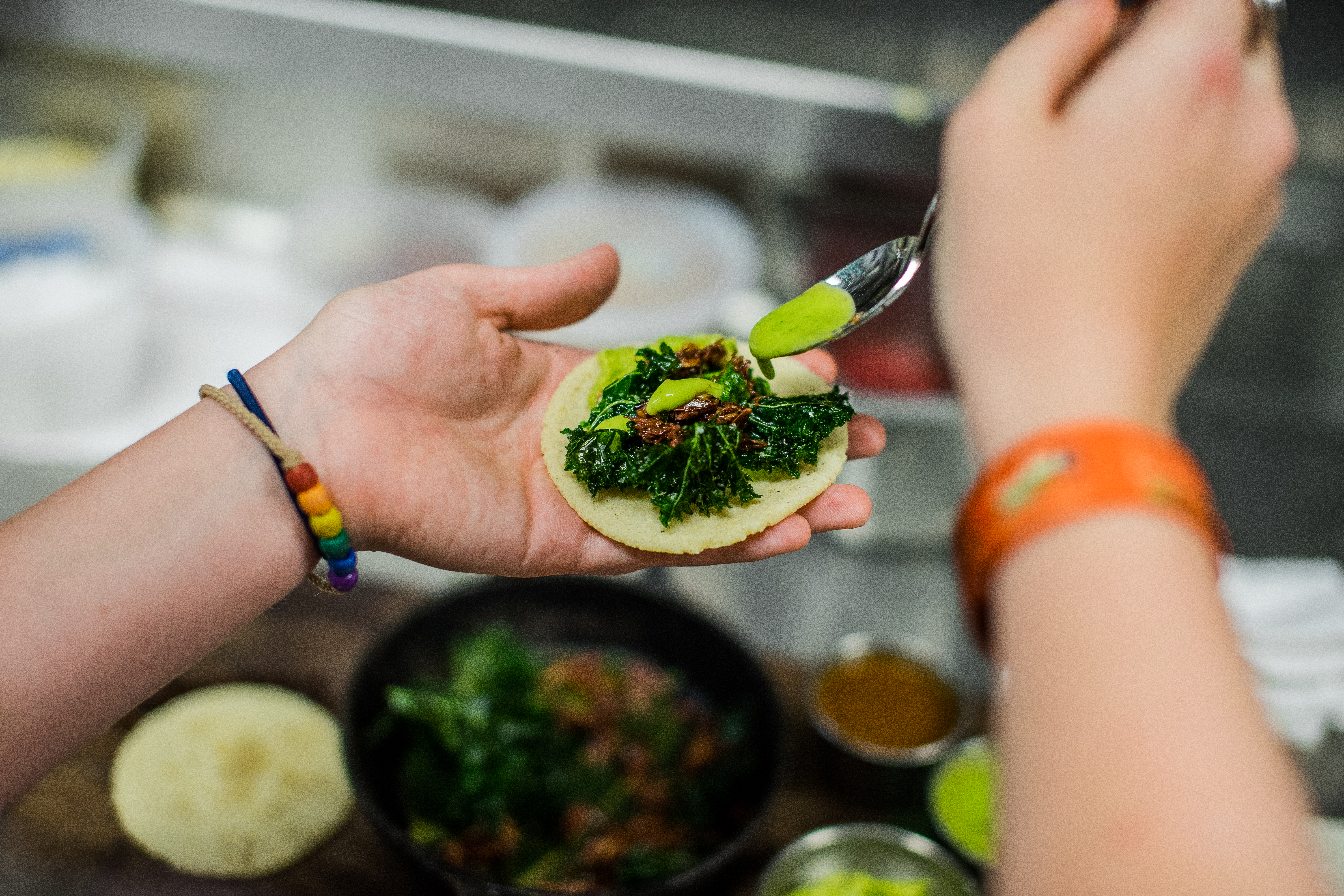 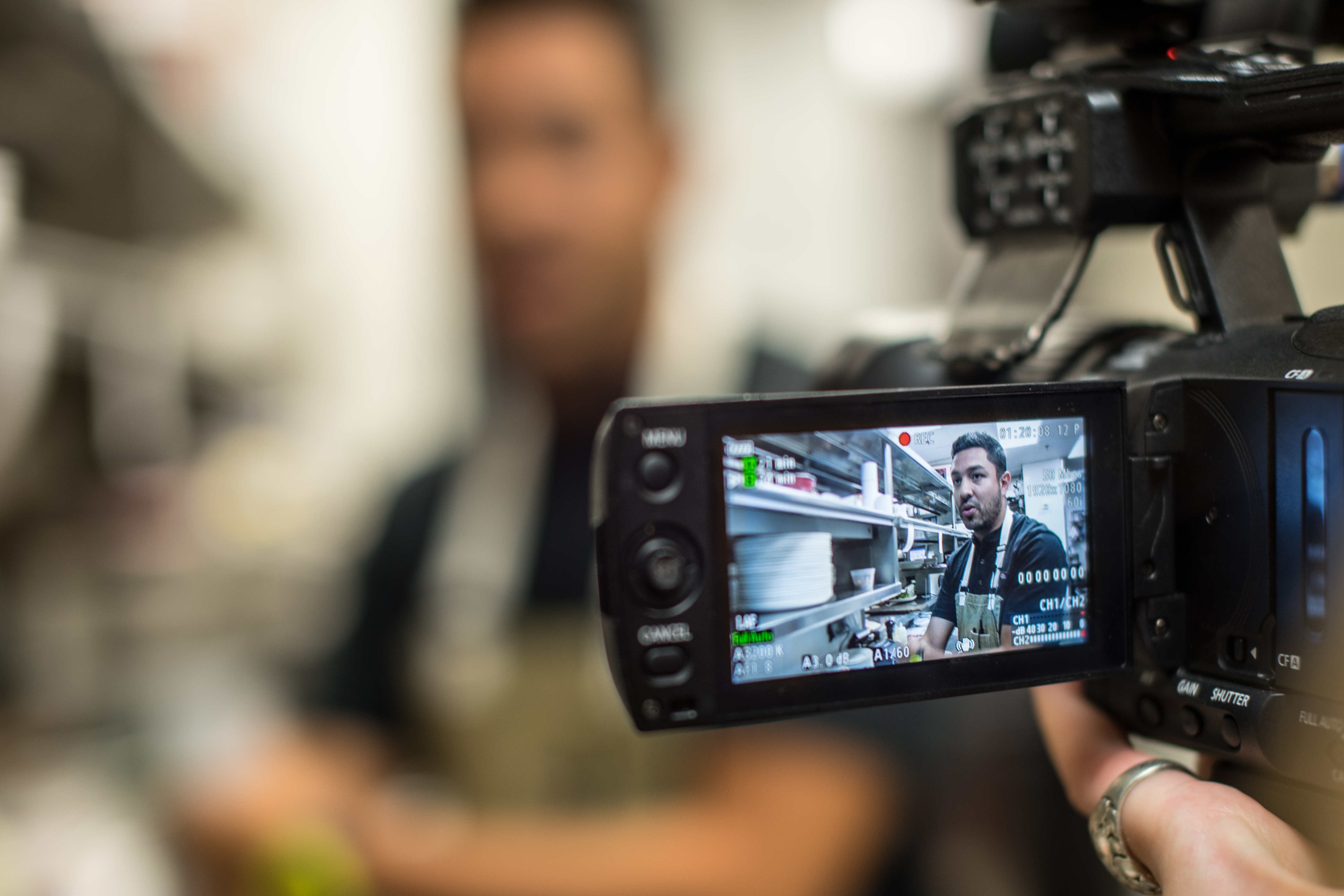 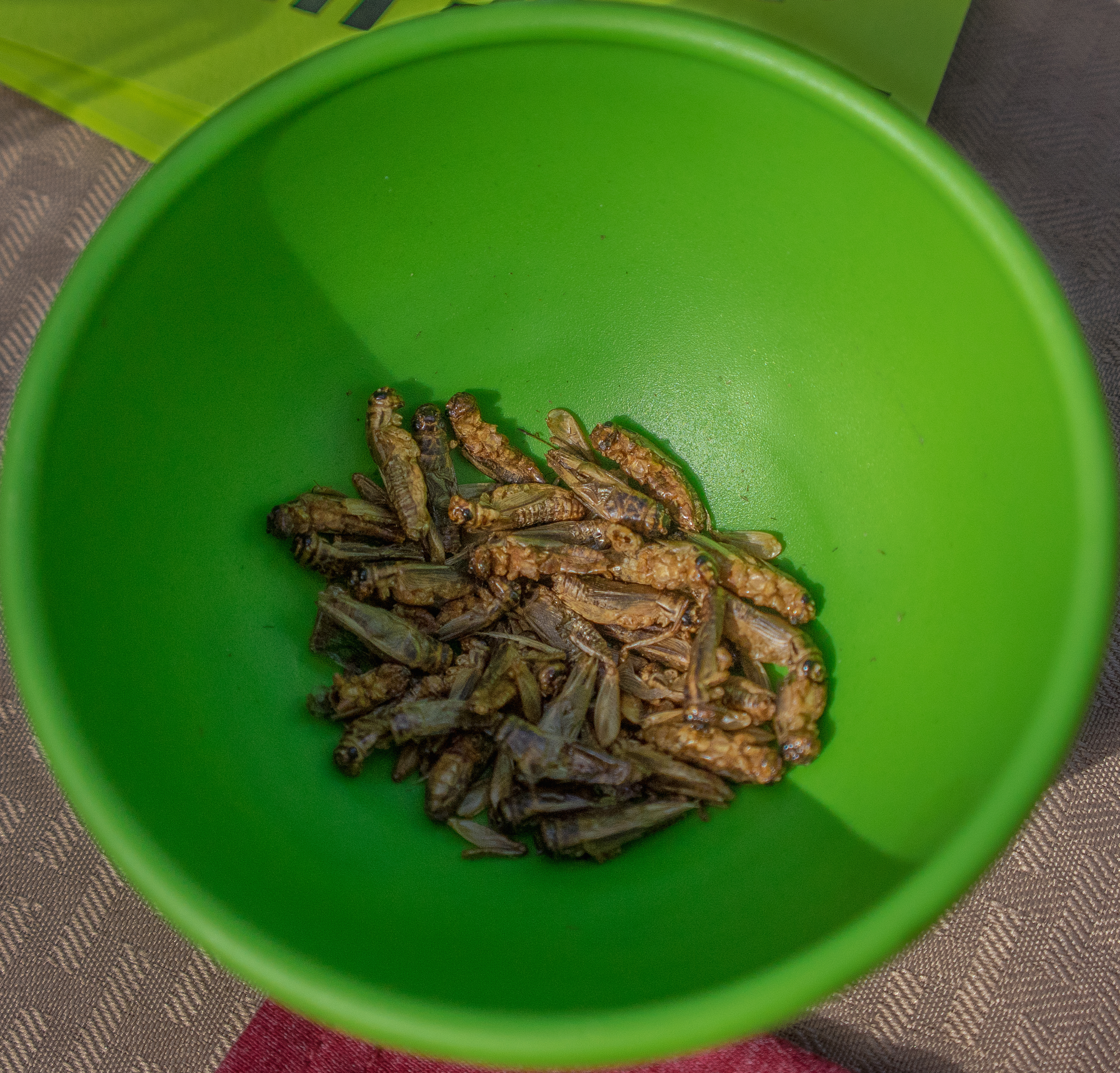 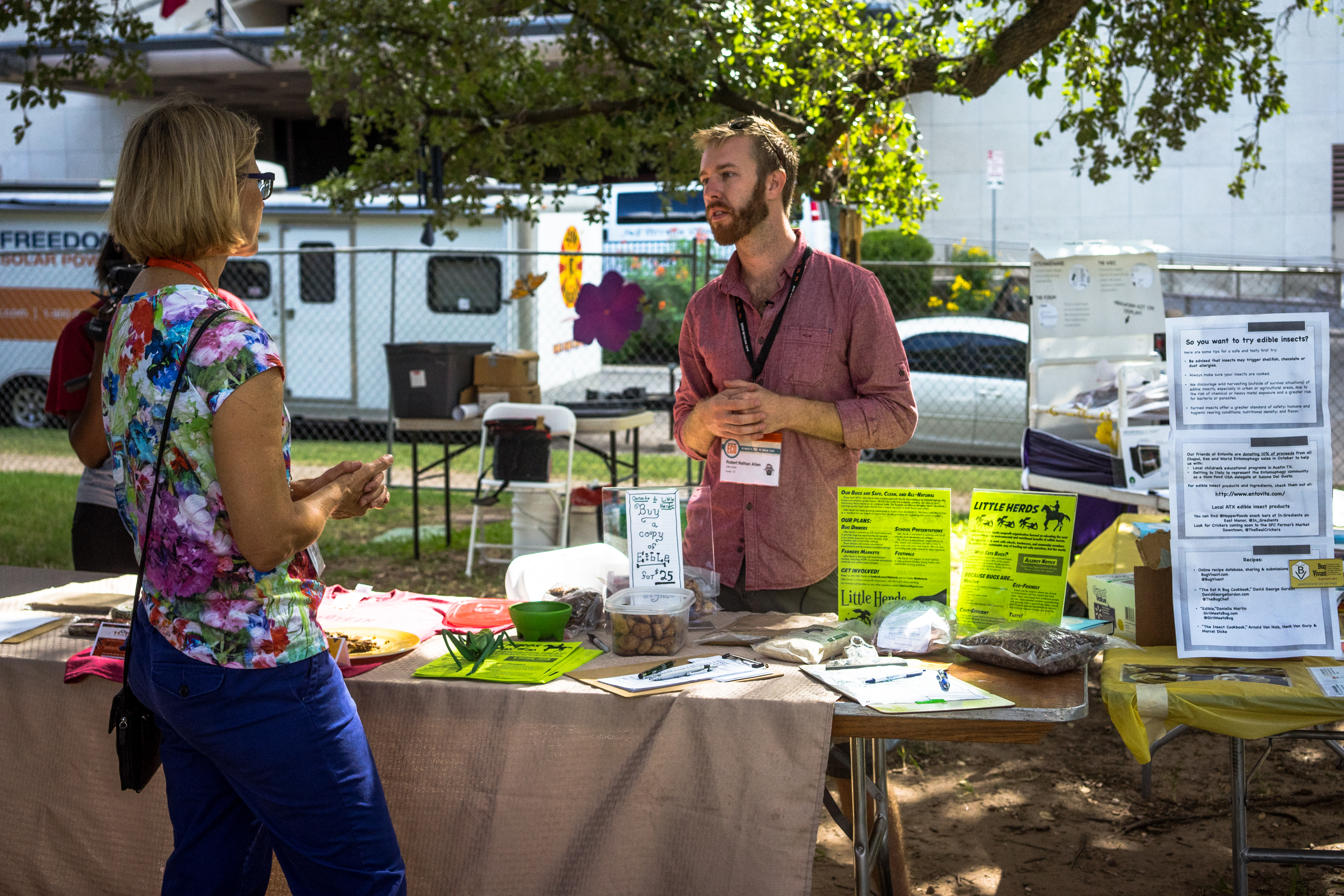 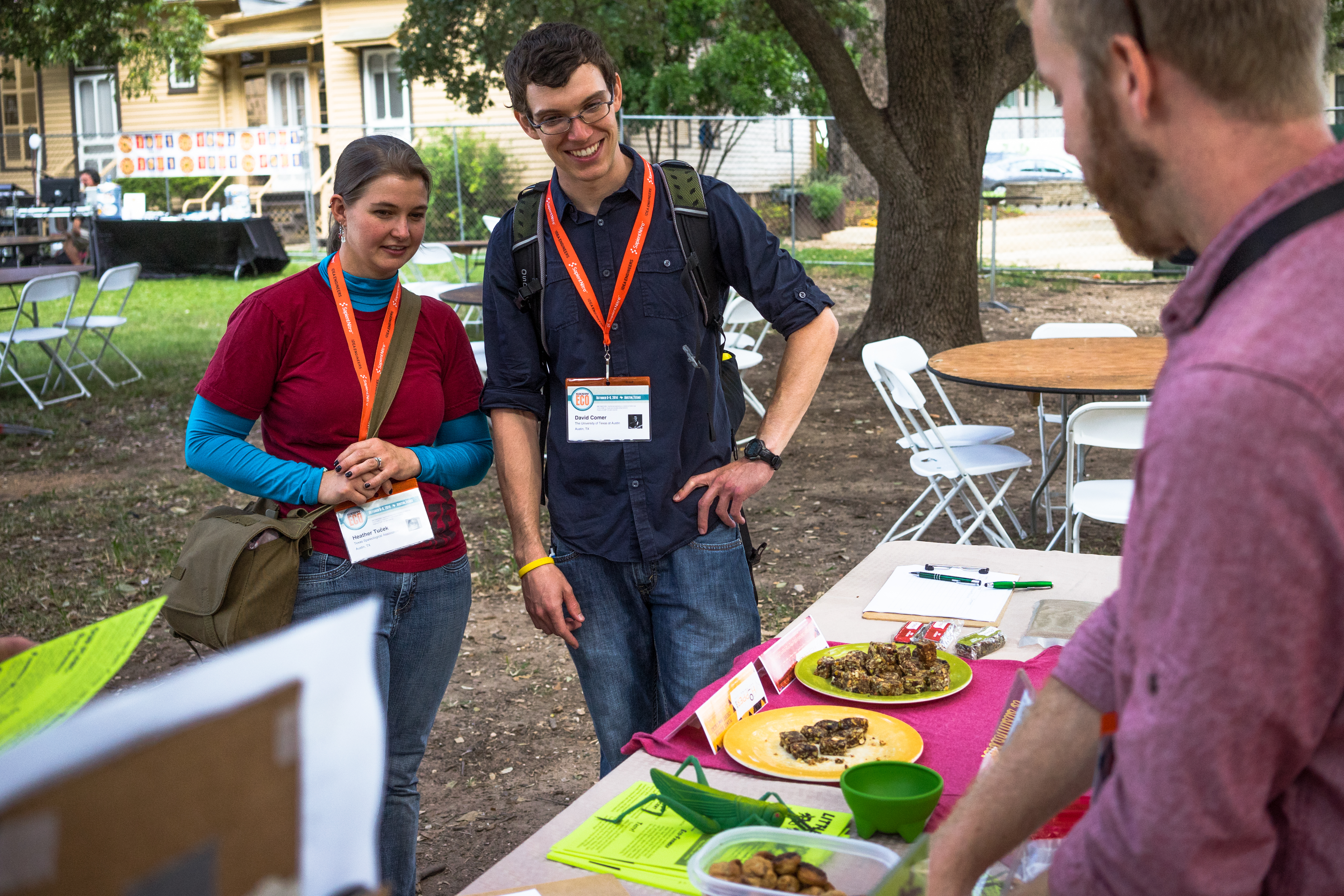 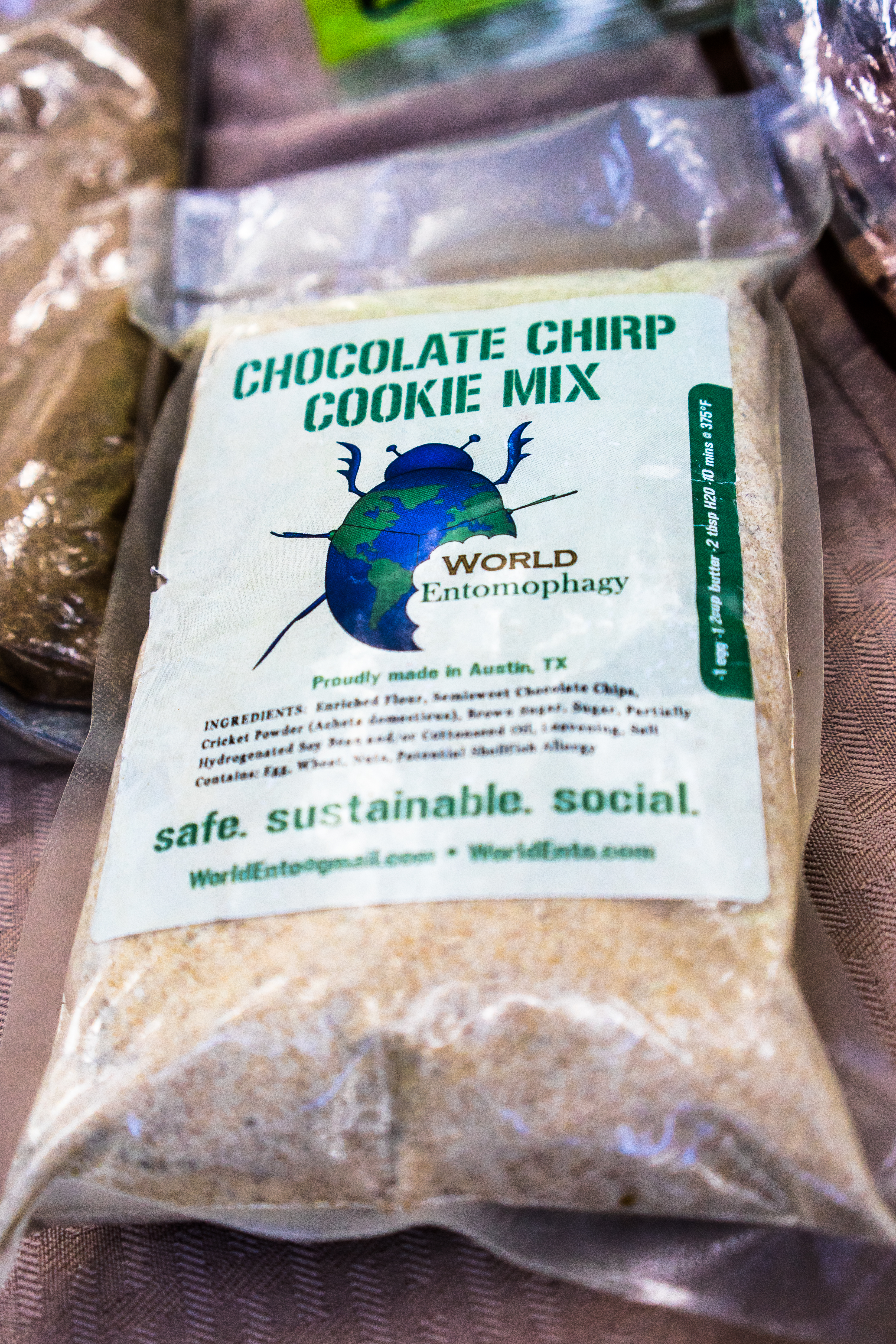 World Entomophagy, an edible-insect advocacy group, produces cricket powders such as Chocolate Chirp mix to ease Austin into the movement. The cookies were available for snacking at the SXSW Eco conference. Photo by Andrew Masi.

Before you grab the fly swatter and aimlessly chase your insect target, think about the little critter that you’re about to swat. A bug’s life isn’t all that it’s cracked up to be. Bugs typically meet their fate at the sole of your wandering shoes or by being showered with insecticides. Creepy crawlies are feared by many, but are mostly considered to be gross. We eat gummy worms, so why not consider eating the real thing?

Robert Nathan Allen was a recent college graduate, managing a local bar in Austin when his mother sent him a video on the sustainability and health benefits of eating insects as a joke. Intrigued by entomophagy, the consumption of insects as food, Allen researched the practice and reached out to entomophagists worldwide. Blown away by the benefits of eating insects, Allen wanted to be the first person in Austin to have bugs on the menu. Although that particular idea didn’t pan out, he spent the next year and a half hatching the idea for Little Herds. 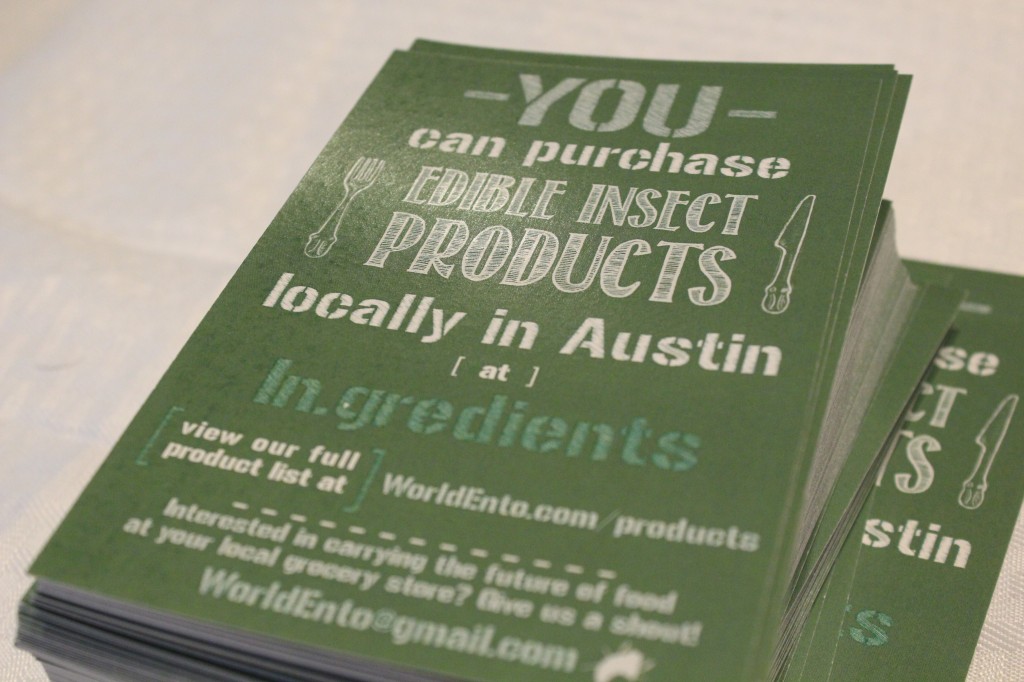 Just like other food products in Austin, one can purchase locally grown insect meals.

Allen may not have been the first person to have crickets and larvae on menus around the city, but he did see the need for an educational advocacy group. Austin lacked a nonprofit that could provide the community with education and transparency on eating insects, but while also focusing on how they are raised, processed and used in food. “Not only do we want to assure that they’re healthy, hygienic, clean and sustainable, but we also want you to see how you can take cricket flour and turn it into something in your own kitchen,” says Allen.

There was no doubt in Allen’s mind when deciding where to plant and grow his project. Known for its interest in nutrition, sustainability and love for all things weird, Austin was the perfect place to get the ball rolling. Allen saw that Texas’ capital city is very progressive and forward thinking, and thought that Austin would be more likely to accept the practice of insect eating.

He also spent a great deal of time finding the perfect name to suit his bugged out venture. “Little Herds ended up being the one that had the best fit for what we were doing in terms of focusing on the education of edible insects, but also really focusing on children’s education. It has a great dual meaning there — little herds of insects and little herds of kids eating the insects,” says Allen.

Little Herds was incorporated in June 2013 and received their 501(c)(3) that December.

Still in its infancy stage, Little Herds is focusing on educating the community through various programs. The nonprofit focuses on the younger Austinites- children. Little Herds works hand-in-hand with schools, museums and farmers markets to educate the community on entomophagy by planning various educational programs. Oftentimes, the nonprofit will have events geared towards children that allow them to experiment with insects in the kitchen. Little Herds believes that it’s important to reach out to the younger generation because if they can adopt insects into their diet, they will be more likely to pass it on to their children. The nonprofit partners with local chefs to ensure that the meals are delicious and nutritious.

Little Herds isn’t trying to sugarcoat the idea that people are eating bugs. Being upfront and letting people know and understand what they are eating is important. “The best way to get over that psychological taboo isn’t to hide it or turn it into something that it’s not. It’s to be point blank with people about what they’re eating,” says Allen. 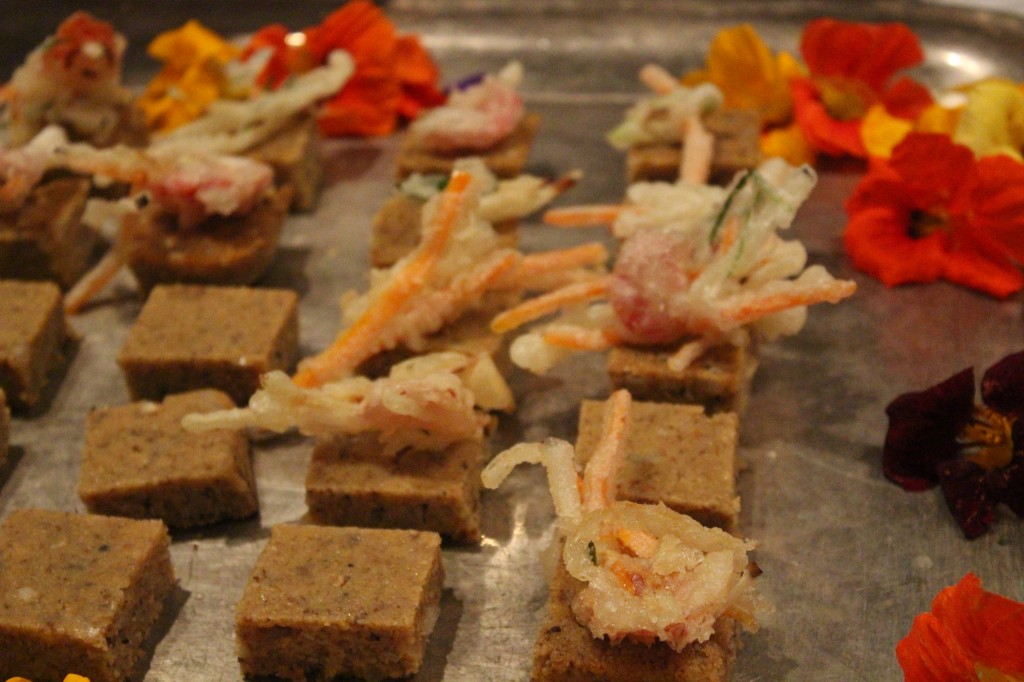 Delicacies such as this were presented during the event, made by professional and educated chefs.

When you inform people about the health benefits and its sustainability and that most of the world eats them, it reduces their fear and hesitation to try the edible critters. “When you present them in an approachable, traditional and normal way, they don’t have a problem giving it a try,” says Allen.

With almost 2,000 edible species in existence, insects provide health benefits greater than those provided by traditional meat sources. Insects tend to be higher in calcium, zinc and protein and are low in cholesterol and fat. Hormones and antibiotics aren’t used when raising insects. Unlike with other animals, there is no risk of crossover diseases with insects. An insect diet proves to be healthy for humans, but is also beneficial for Mother Earth. Raising and harvesting insects uses very little land, water and feed.

“This is something that people can grow in their backyard, anywhere in the world. Even if you’re in drought conditions, disaster conditions, this is a protein source that’s healthy and you can grow with very little input,” says Allen.

By 2050, there will be an estimated nine billion people on the planet. At this rate, there won’t be enough food to sustainably feed that many mouths. “We can take insects and create these foods that can really help relieve famine and malnourishment in areas all over the world. It’s something that could have a long shelf life. It’s something that can be processed easily and cheaply and won’t lose all that nutritional density,” says Allen. Incorporating insects into one’s regular diet is an economically approachable, low-tech solution. 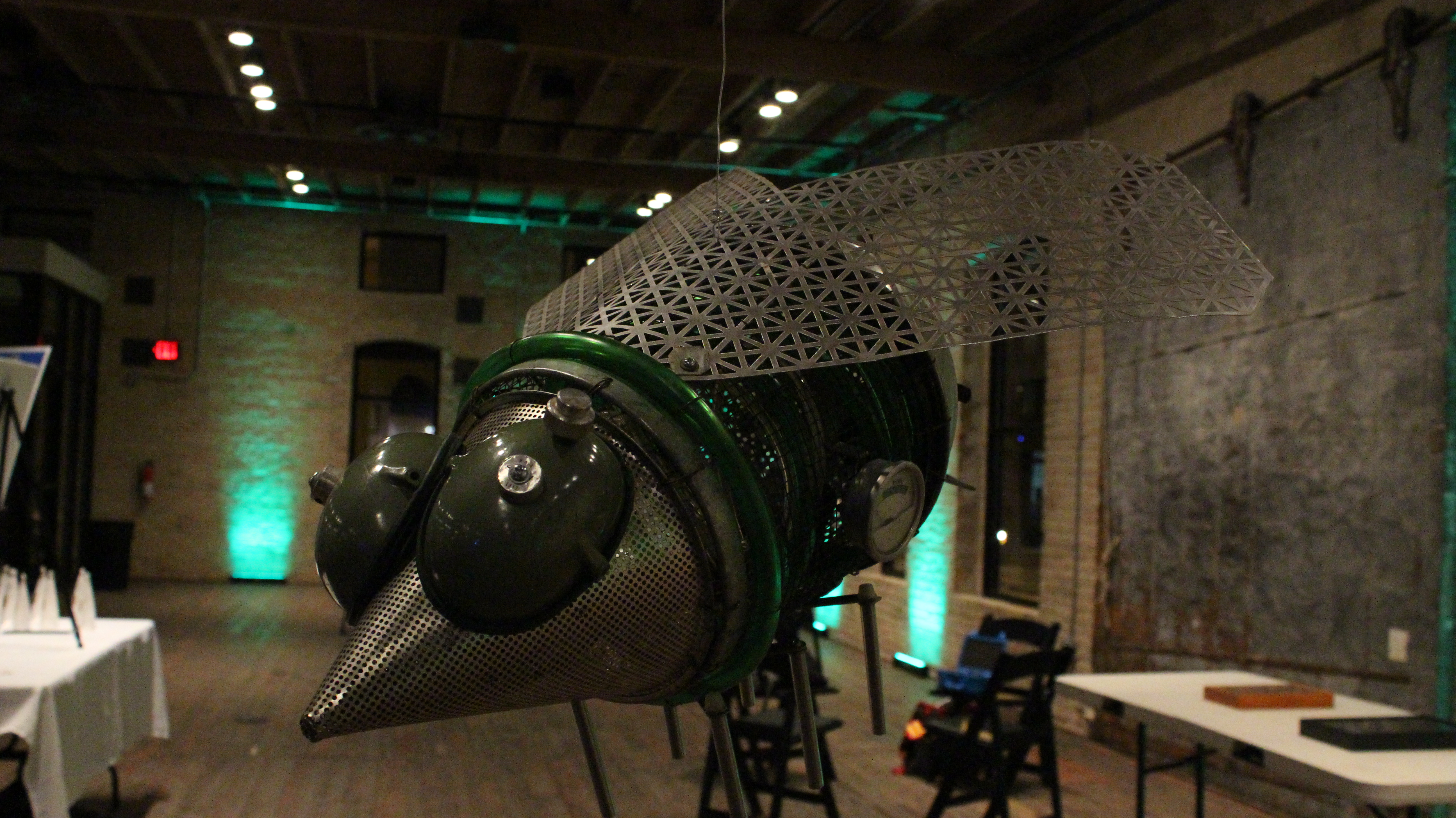 IMG_3380
Not only was insect food available at the event, but also insect-inspired art was present for viewing and buying. 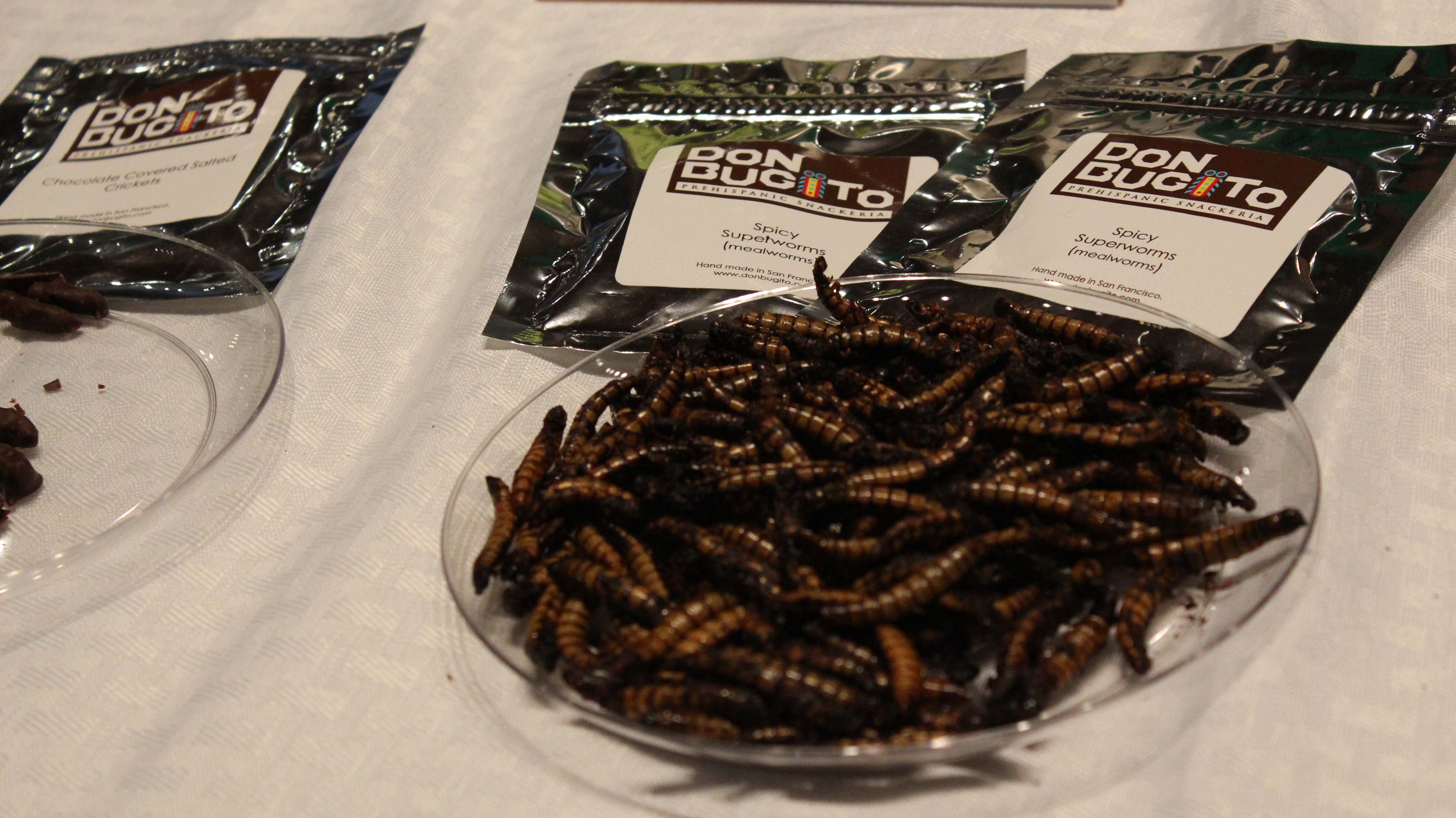 IMG_3386
Don Bugito, based in San Francisco, produces food made from insects is famous for using the word “bugito” to refer to their products. 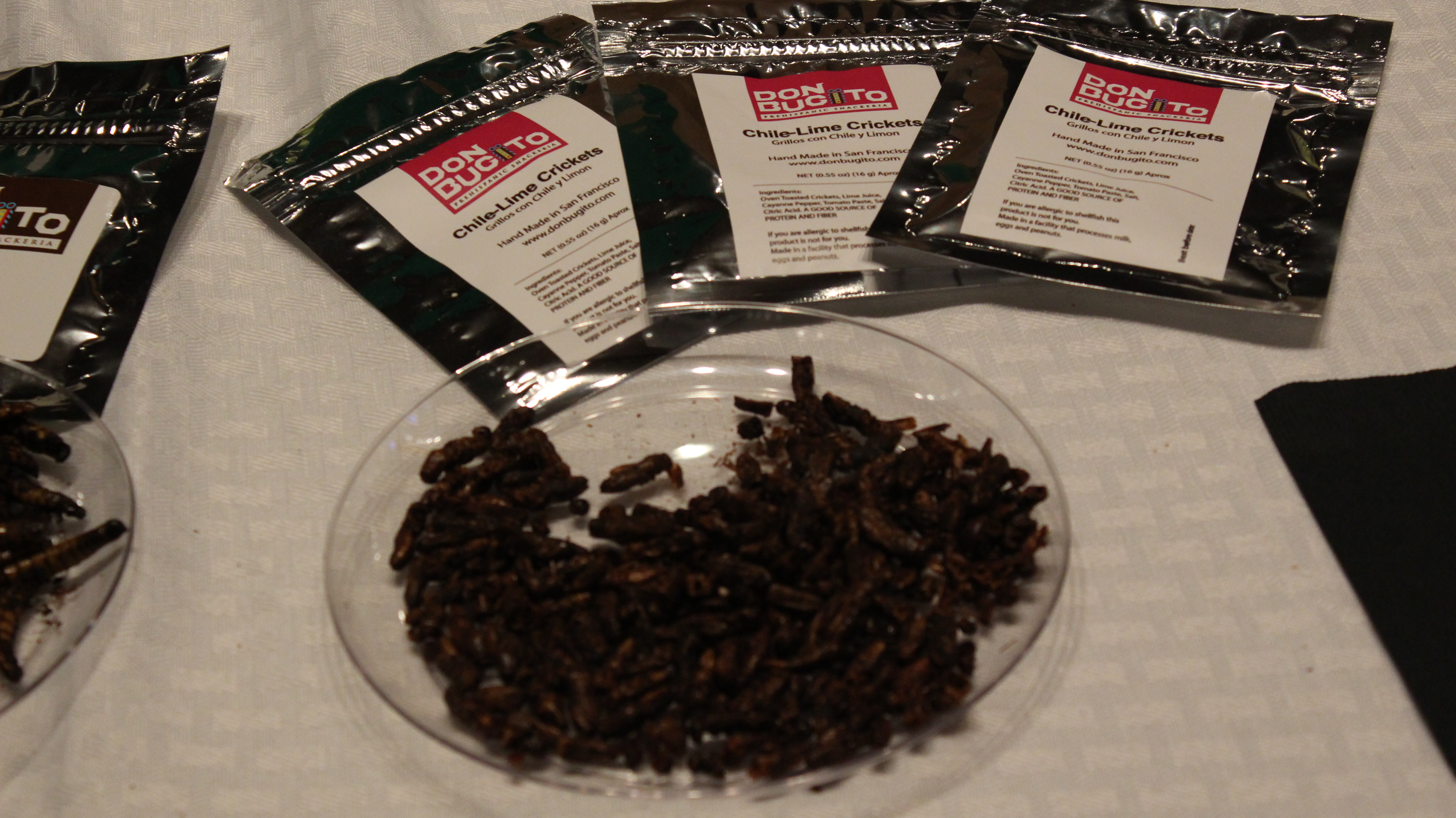 IMG_3387
Crickets and mealworms are some of the most popular food items when constructing meals and snacks from insects. 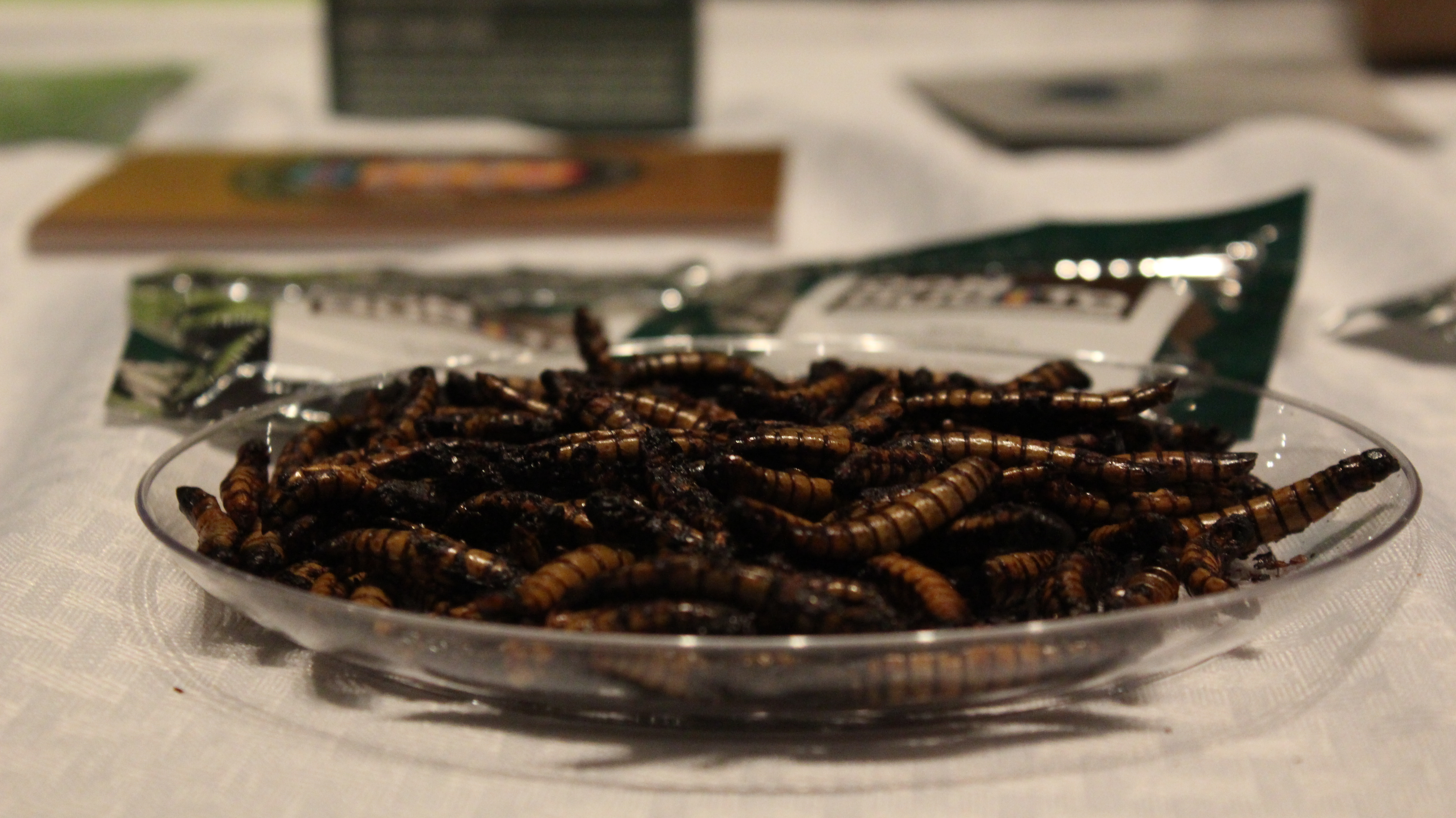 IMG_3390
Spicy worms are filled with protein and were served as a snack at Future Food Salon. 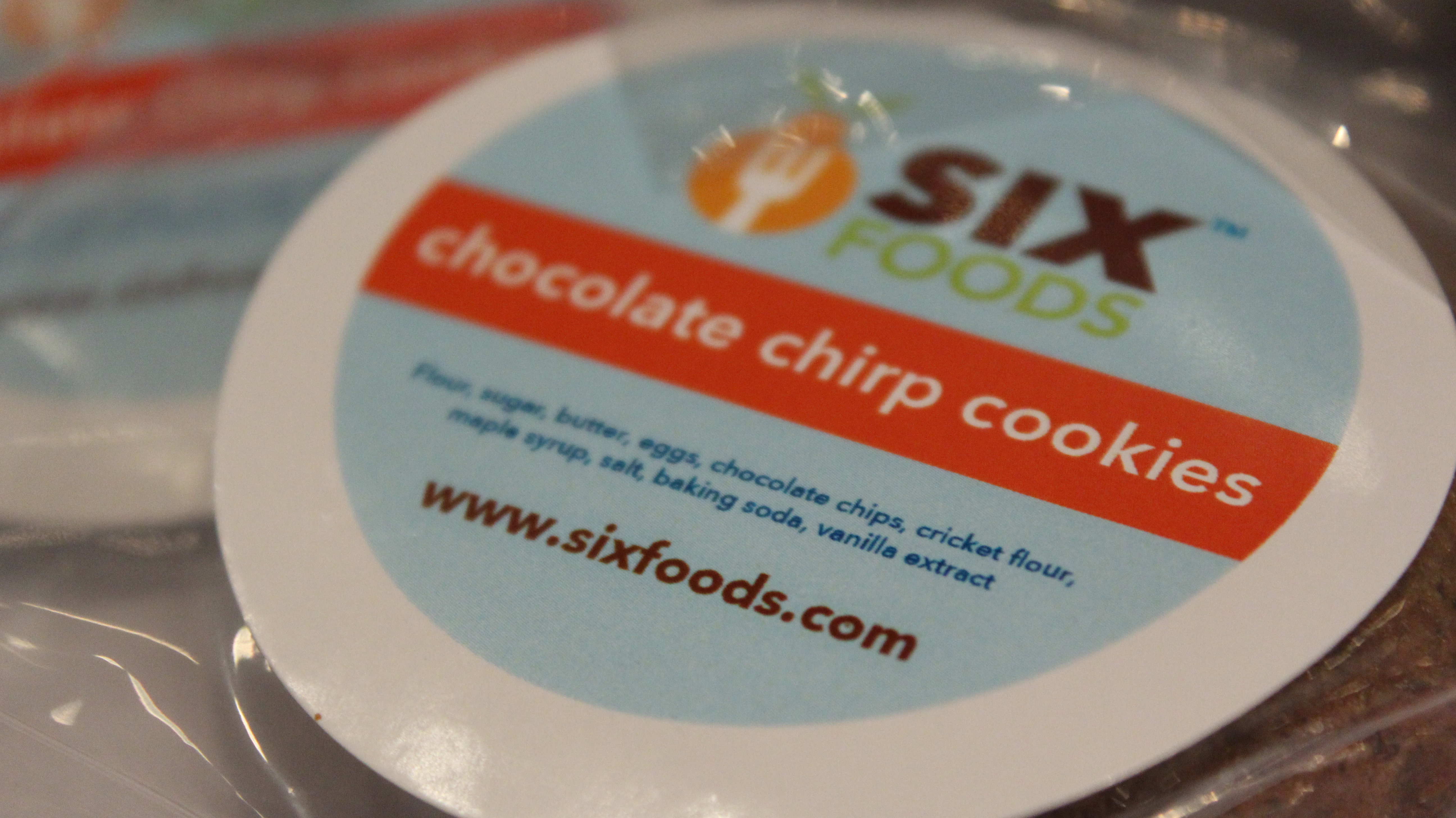 IMG_3393
Six Foods, along with Little Herds, crafts culinary works of art made from insects, such as crickets and mealworms. 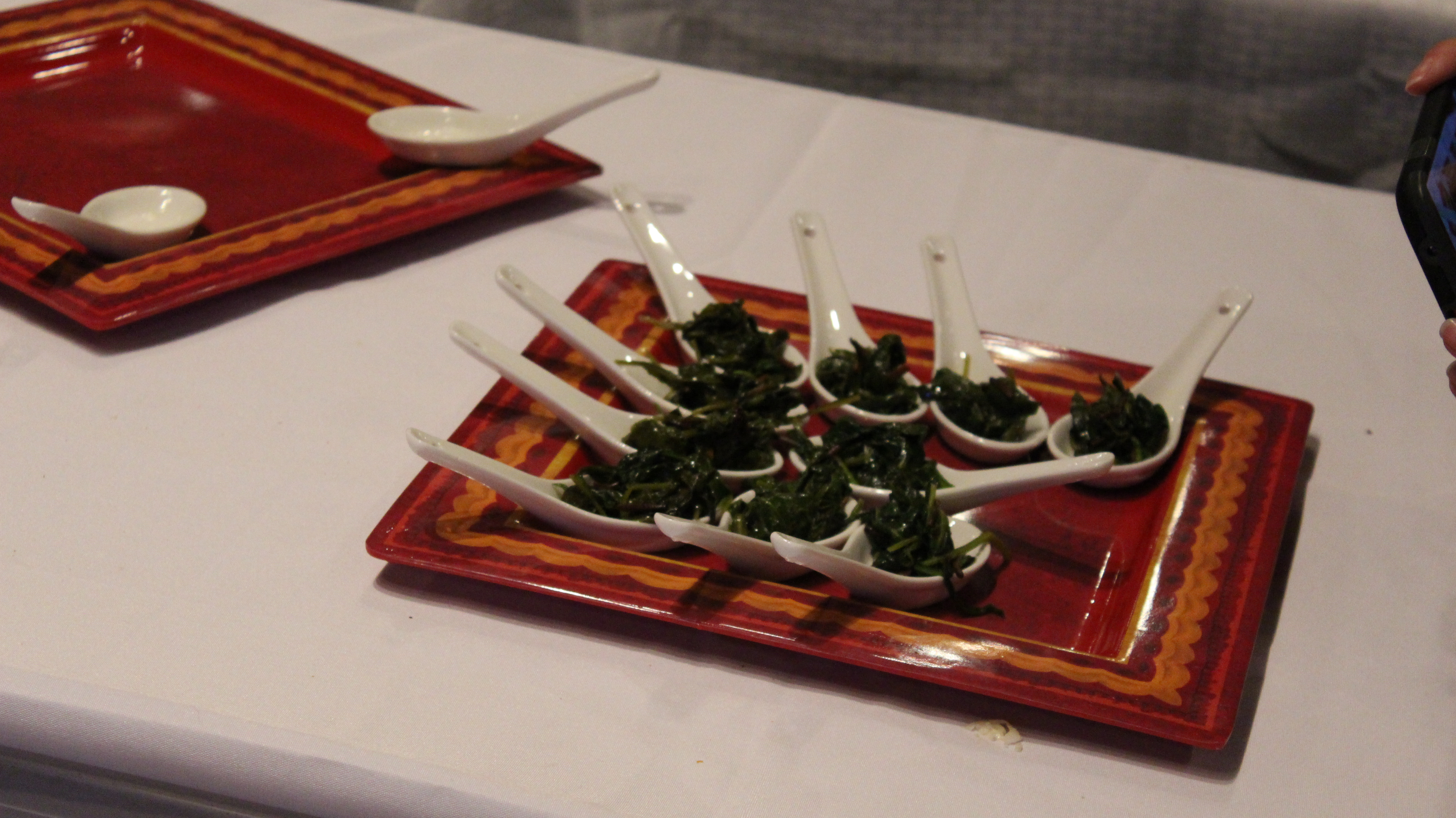 IMG_3434
As crazy as eating insects sounds, each dish brought out during the event quickly disappearing. 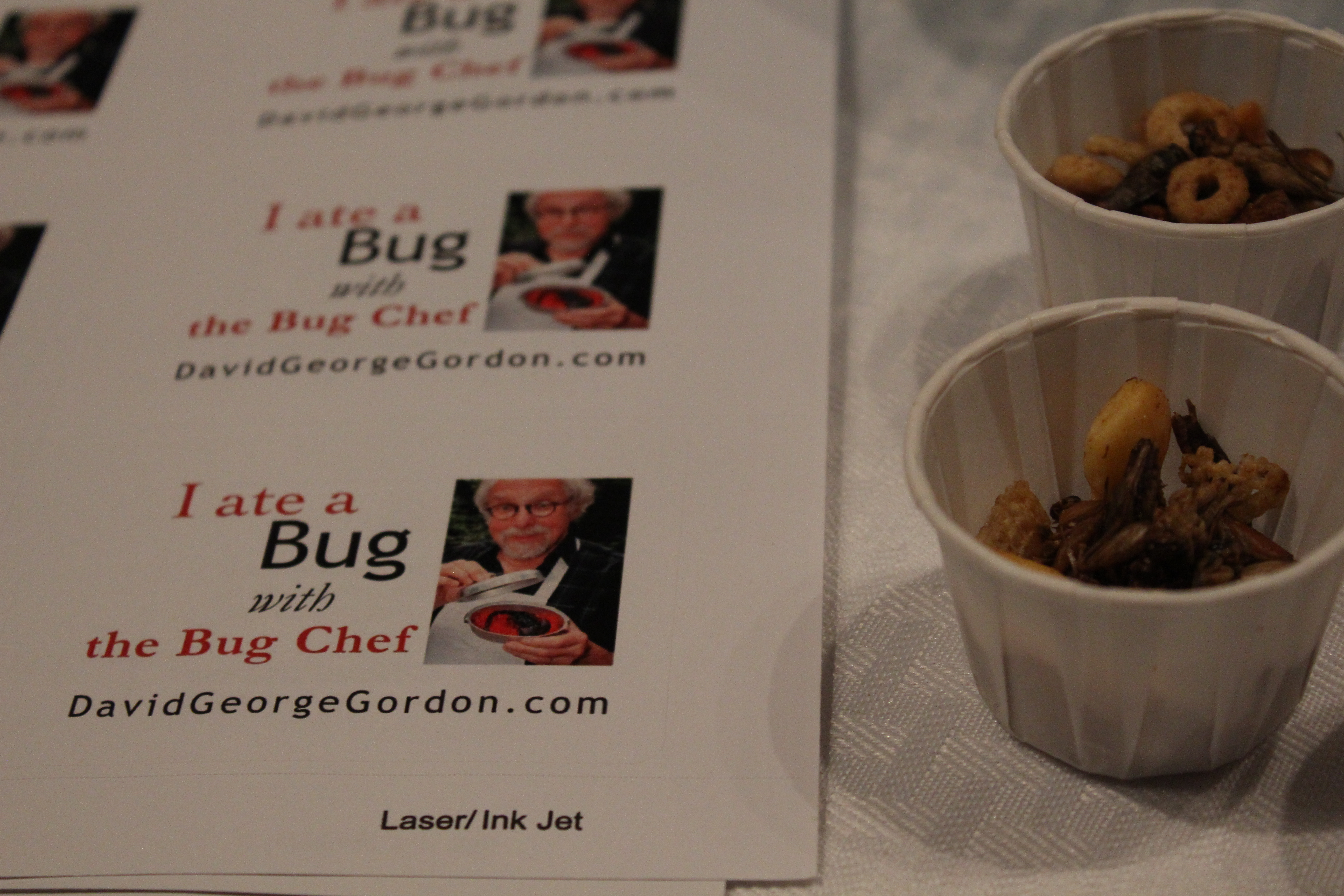 IMG_3450
Chefs were present to try the appetizers and samples with patrons at the Future Food Salon. 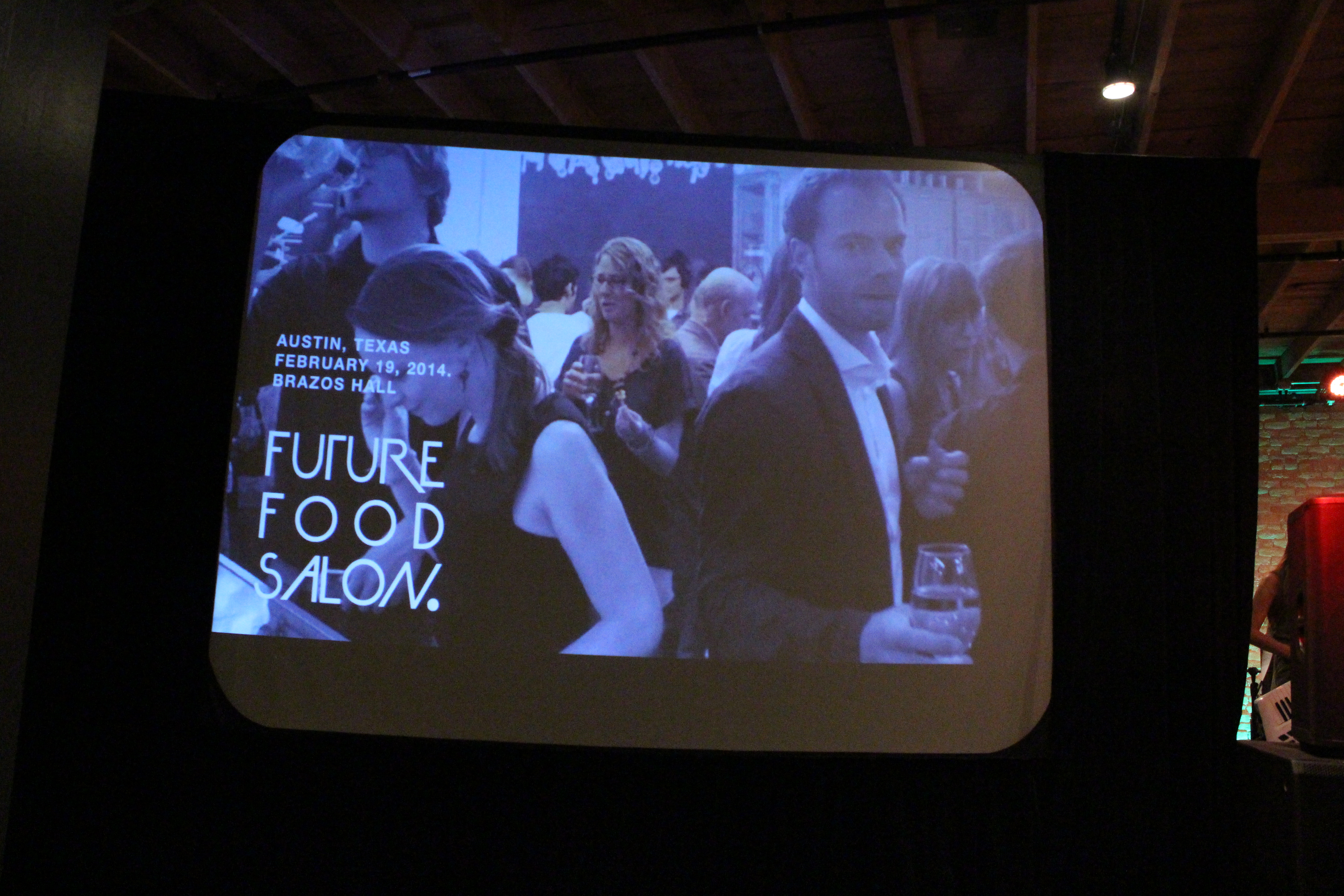 Little Herds is working with businesses and government agencies to sure that the public is properly educated about where to get their insects and how to prepare them. Eventually, their hope is to start a movement and share this practice with the rest of the country.

With organizations like Little Herds in the picture, maybe people will be less bugged out to try insects.