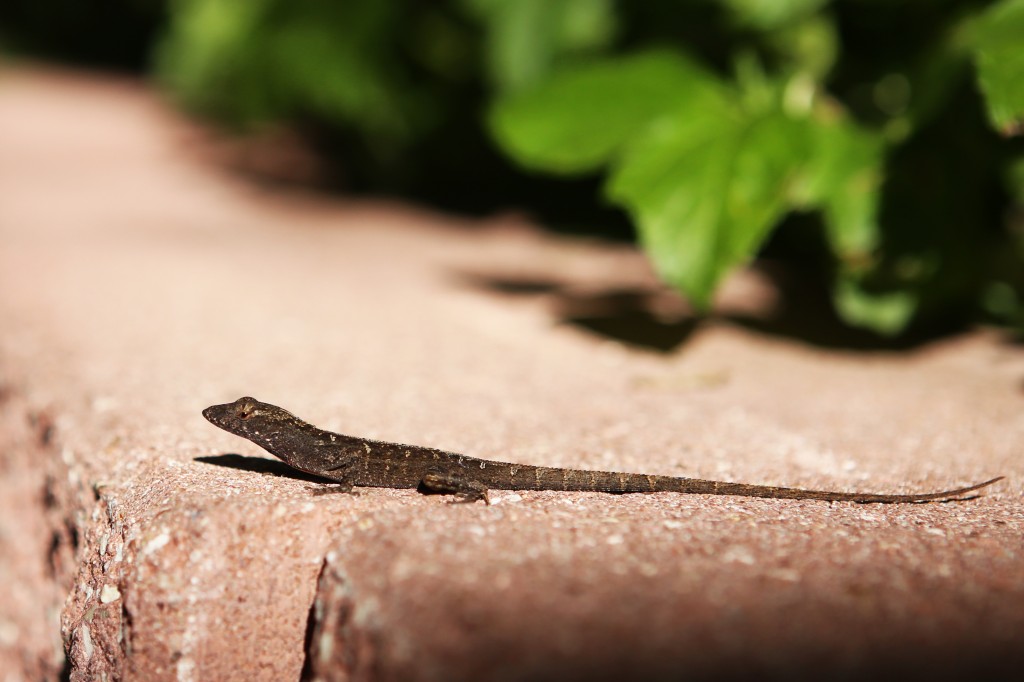 A brown anole lizard suns itself in the Rio Grande Valley of Texas, one of the areas in which this lizard, native to Cuba, is now present. (Photo by Maria Roque)

The Carolina Anole, referred to as the green anole lizard, has an unexpected guest in town, and it might be here to stay.

The Cuban brown anole, which first started invading South Florida in the 1950s, has made its way to Texas. Though similar in appearance, green and brown anoles are two separate species, and according ecologists, when large populations of both cohabitate in the same area, they compete for food and habitat. Today, the brown anoles are a firmly established lizard species in most urban areas of peninsular Florida, and they have continued to migrate to neighboring states in parts of Georgia, Louisiana and Texas.

Since their presence has upwardly increased in the Southern United States, ecologists and evolutionary biologists have taken interest in how green anoles were interacting with the brown anoles, and if invasive competition was a threat to eventual extinction.

Yoel Stuart, a postdoctoral researcher in the College of Natural Sciences at the University of Texas at Austin, conducted a study on the presence of brown anoles in Florida and how they are affecting the green population. 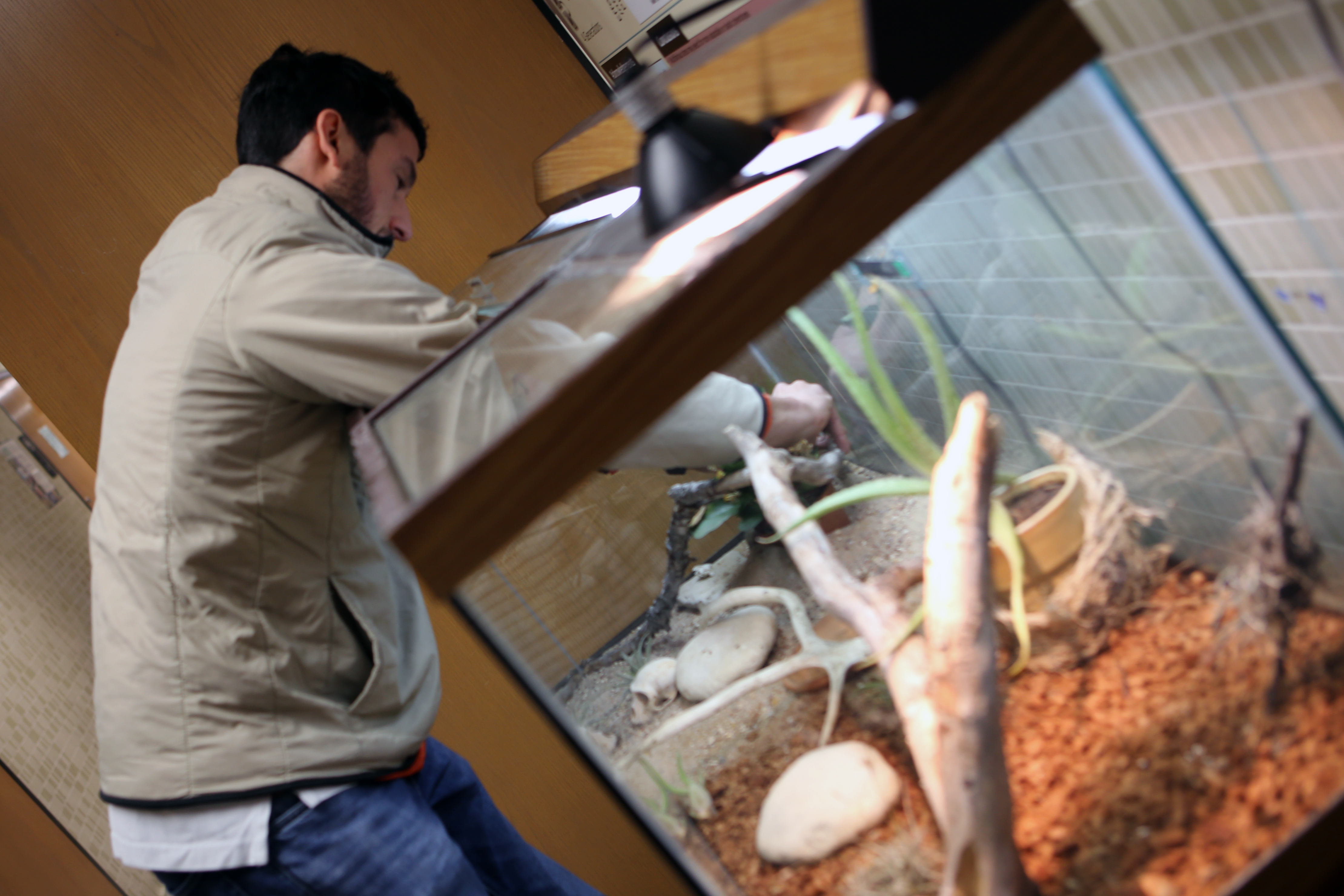 Yoel Stuart, a postdoctoral researcher in the College of Natural Sciences at The University of Texas at Austin, lead a study on how the invasive brown anole elicited an evolutionary response from green anole. (Photo by Alice Kozdemba) 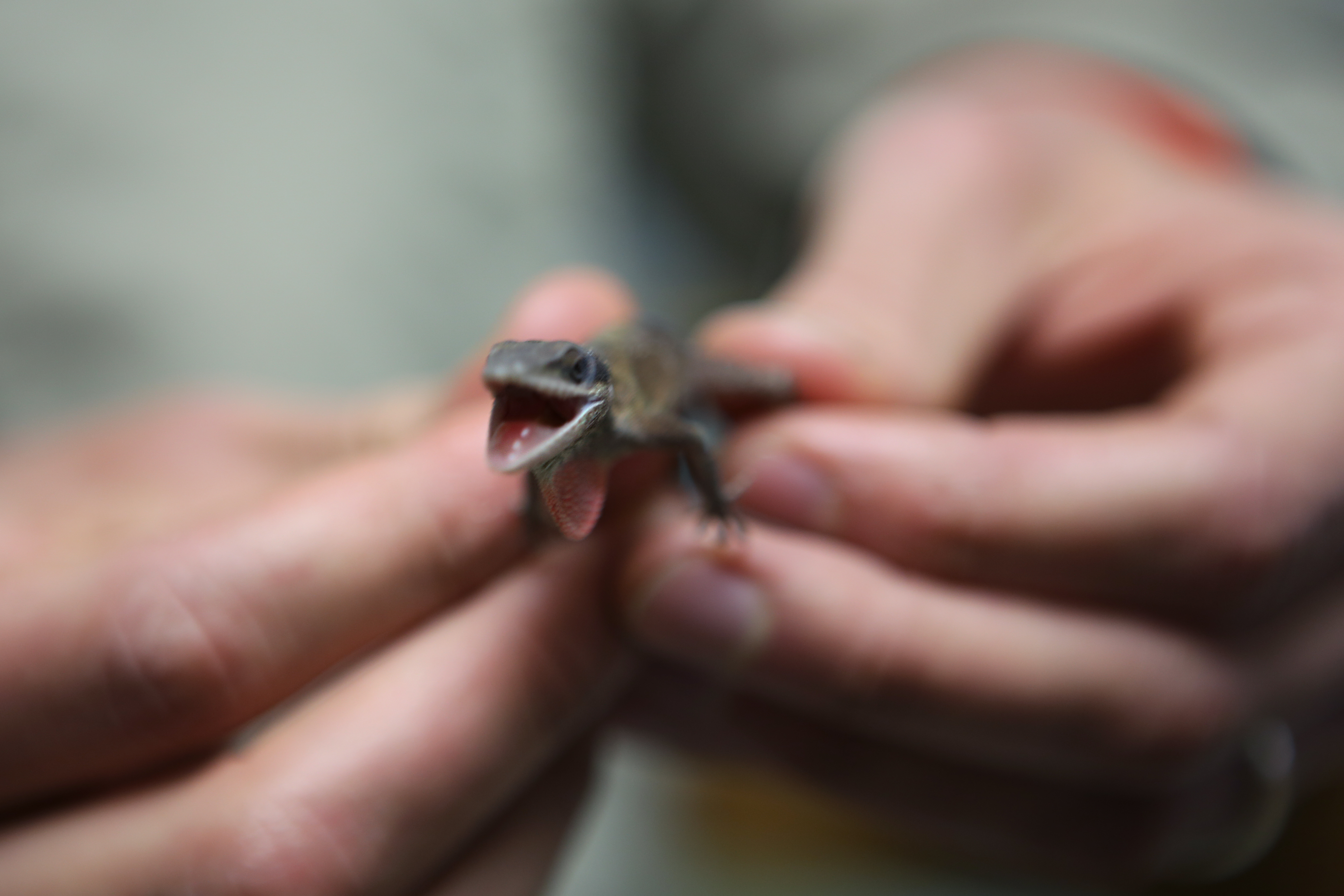 Anole lizards are territorial creatures, and they can be aggressive. (Photo by Alice Kozdemba) 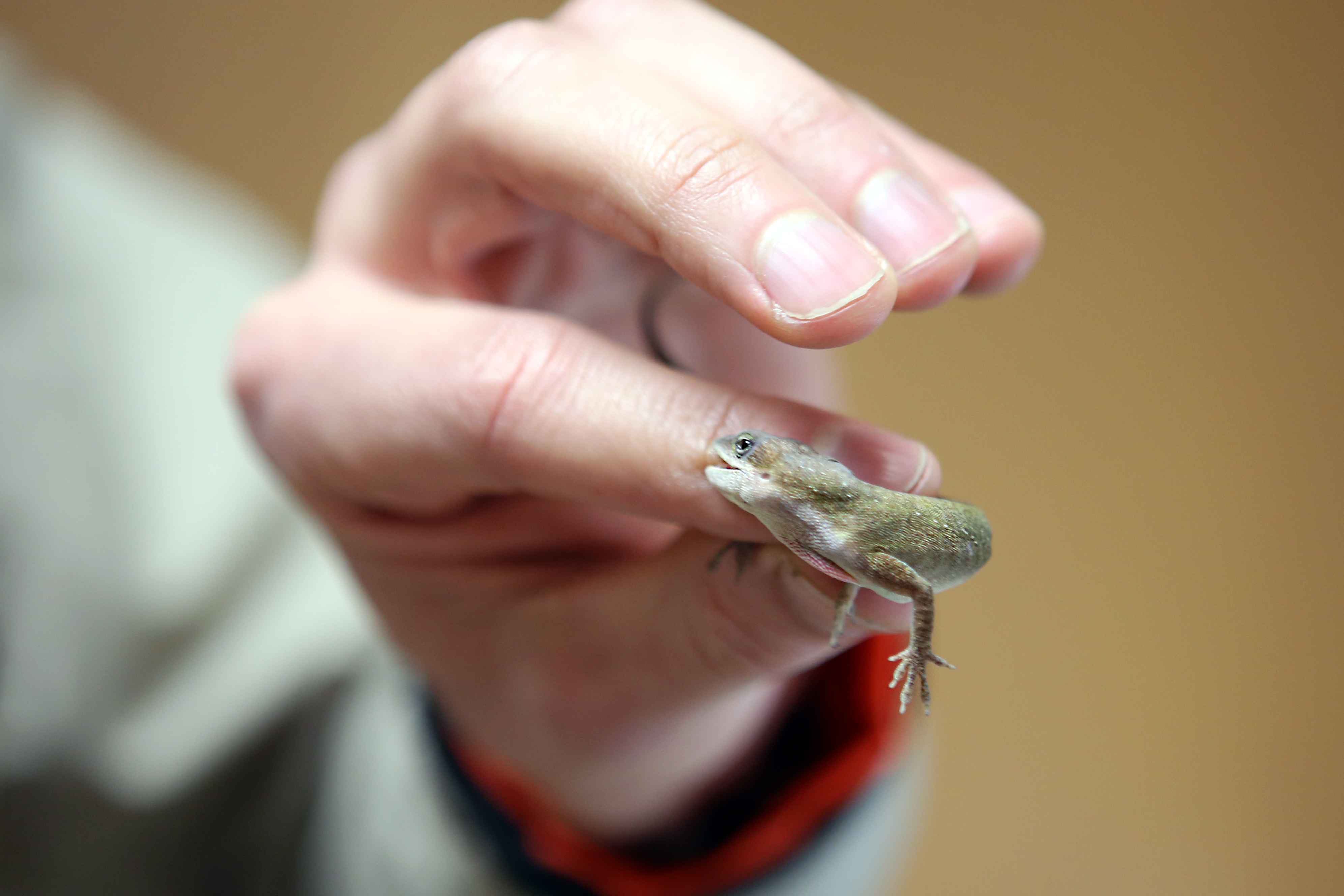 Anole lizards can be aggressive. A lizard bites UT researcher Yoel Stuart as he demonstrates the subject of his dissertation. (Photo by Alice Kozdemba) 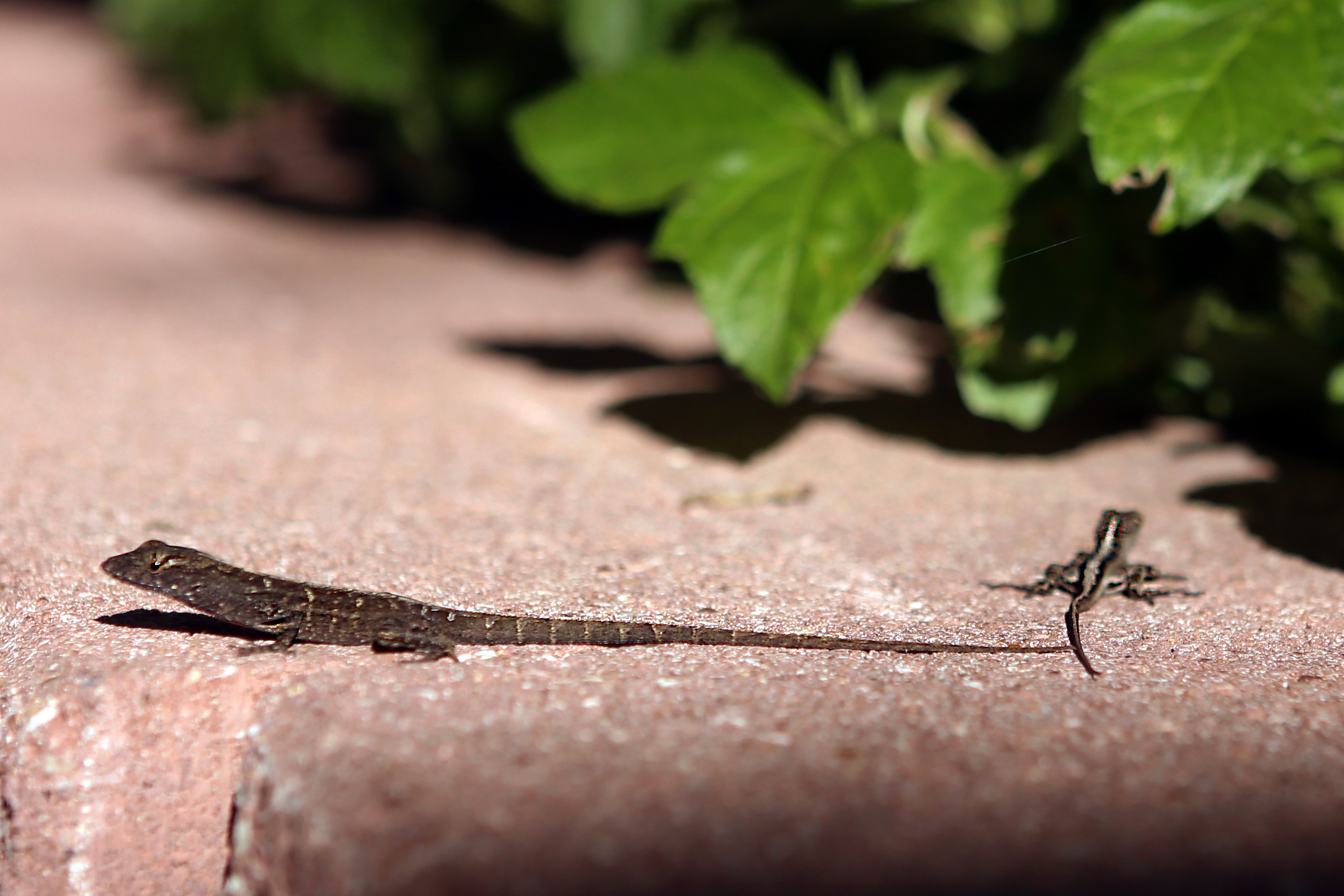 Brown anole lizards can be found in the Rio Grande Valley of Texas, where the humid climate suits the Cuban natives. (Photo by Maria Roque) 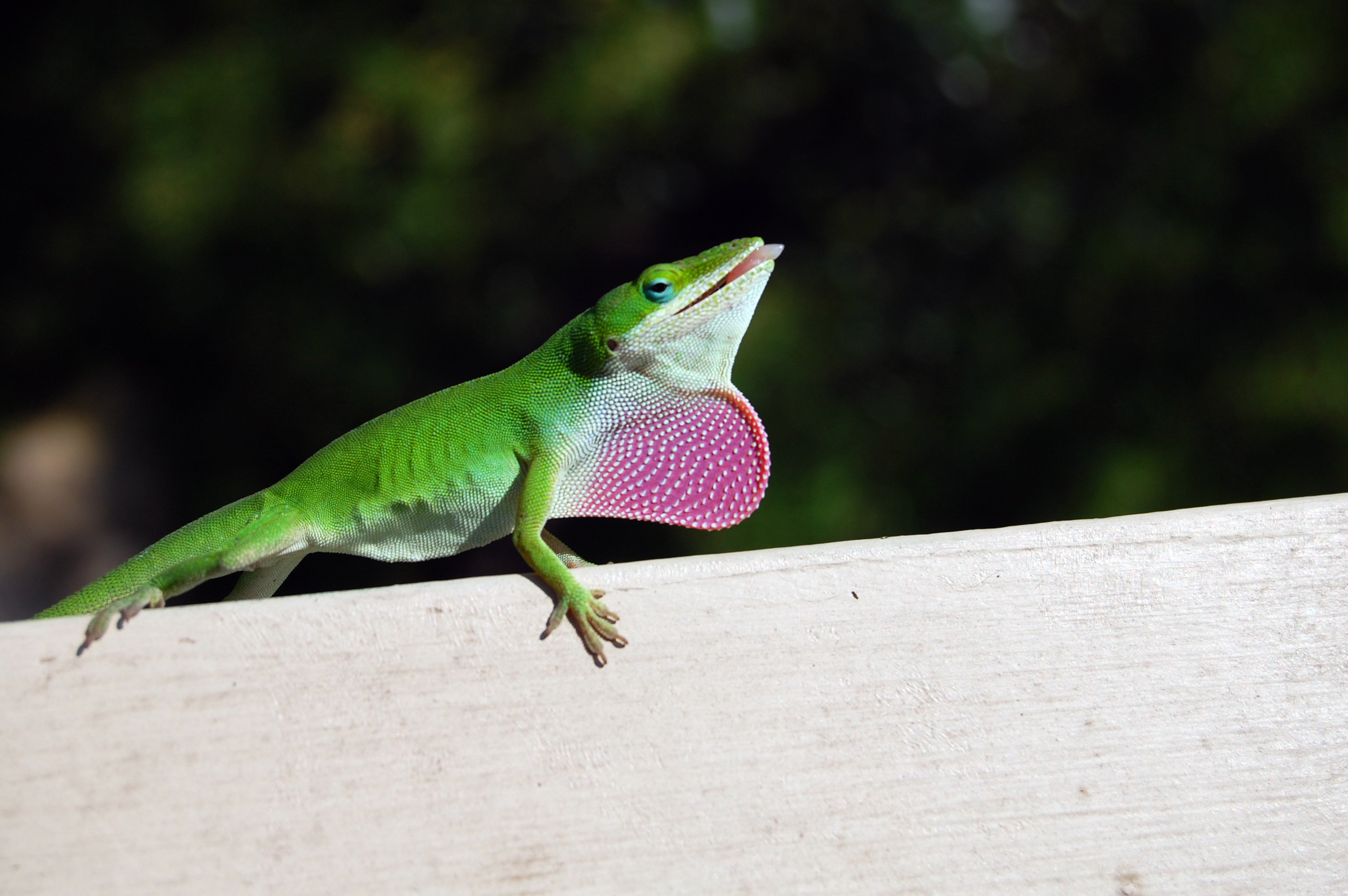 Male green anoles have a pink dewlap that they flare to during the mating season to assert dominance.

“I was really excited at the time about how quickly evolution could proceed, and I wanted to know whether two species that are interacting with one another,” Stuart said. “Whether competitive interactions between two species could drive evolution at rates that we could see in our own lifetimes.”

After months of capturing and observing lizards, Stuart and his team found that green anoles had physically and behaviorally evolved to cope with the invasiveness of their brown cohabitors. After contact with the invasive species, green anoles began to climb higher into the trees, and within 15 years, the green species had developed larger toe pads, which give the anoles better gripping and climbing force. Stuart said he wasn’t surprised that the species evolved, but that the rate at which evolution was occurring was remarkable.

“The evolutionary response is pretty rapid,” he said. “If human height were evolving at .05 standard deviations per generation, in 20 generations we’d all be the size of NBA shooting guards.”

“They have different colored flaps of skin under their throat, the series of head bobs and push ups that they do is different. It’s likely that they don’t even recognize each other as potential mates,” Stuart said.

Though Stuart’s research is specific to anole populations in Florida, scientists and researchers are looking at the level of local invaders. According to Texas herpetologists who specifically study regional reptile populations, brown anoles are mostly seen in South Texas, primarily in Houston and San Antonio. They make their way to Texas by hatching eggs on imported soil from Florida that is distributed to local garden shop retailers, Stuart said.

“The best place to catch brown anoles in Texas was in the garden department of Home Depot,” Stuart said. “Potted plants are perfect for laying out anolus eggs, and then those plants get moved around.”

Anoles in Texas from Elizabeth Williams on Vimeo.

Hitching a ride to the states via plant and human transportation is something of an art form for the brown lizards. Ecologists suggest that their initial migration to Florida was possible in part by stowing away in agricultural shipments from Cuba.

But brown anoles aren’t the first critters to invade the Lone Star state. Texas is an ecological hotspot for invasive species to thrive due to its tropical-like temperatures. Randy Simpson, an associate professor at Texas State University in San Marcos studies invasive wildlife in Central Texas. Though the brown anole population in Texas is low, he said it could have the potential to follow in patterns of other invasive populations, such as the Rio Grande chirping frog.

“As its name implies, it was found only in the Rio Grande Valley and now its found as far as the Dallas-Fort Worth area. It follows major highway systems and it’s found in major metropolitan areas,” Simpson said. “I suspect that the brown anole will probably follow the same pattern.”

However, Simpson said that it is not yet clear what impact the brown anole will have on green anole populations.

“Well, it remains to be seen as to how much of an impact the brown anole is going to have. It’s definitely had a big impact in Florida, but here in Texas so far it’s been minimal,” Simpson said. “People have noted that it has appeared … primarily in places like nurseries, garden centers.”

Some researchers who look at insect invaders have drawn a connection between non-native species and global climate change. Scientists who study biodiversity claim that  longer warm weather seasons are causing non-native plants to relocate and take over American soil. But whether there’s evidence that the same could case could be made for vertebrae and reptiles, Simpson said, is uncertain.

“Common sense will make you think, yeah if the temperature is changing and on the average getting warmer, then those animals that need warmer temperatures could move further north,” Simpson said. “That’s a possibility, but I don’t think anybody has definite information, particularly on the brown anole or anything like that.”

Regardless of its unforeseen future, the battle between green and brown anoles is catching the attention of local residents. Mike Tanis, a lifelong horticulturalist and wildlife enthusiast, said green lizards are a staple feature of his backyard garden.

“I’ll always spot a few [green anoles] when I’m gardening, just lounging on a leaf and getting some sun,” Tanis said. “I’ve actually seen brown lizards in Florida but I had no idea they were a different species. I hope the brown ones don’t take Austin over; the green guys are too much fun!”