You bike alongside Lady Bird Lake, and all of a sudden, you see a guy standing on a board up in the air with water spurting out from under his feet. What the heck is he doing?

Flyboarding, also called water jetpacking, is a relatively new water sport about 3 years old. Someone stands on a water jet pack — the Flyboard — connected by a firehose to a jet ski, driven by another person. The water pressure from the jet ski moves the person on the Flyboard in the air. 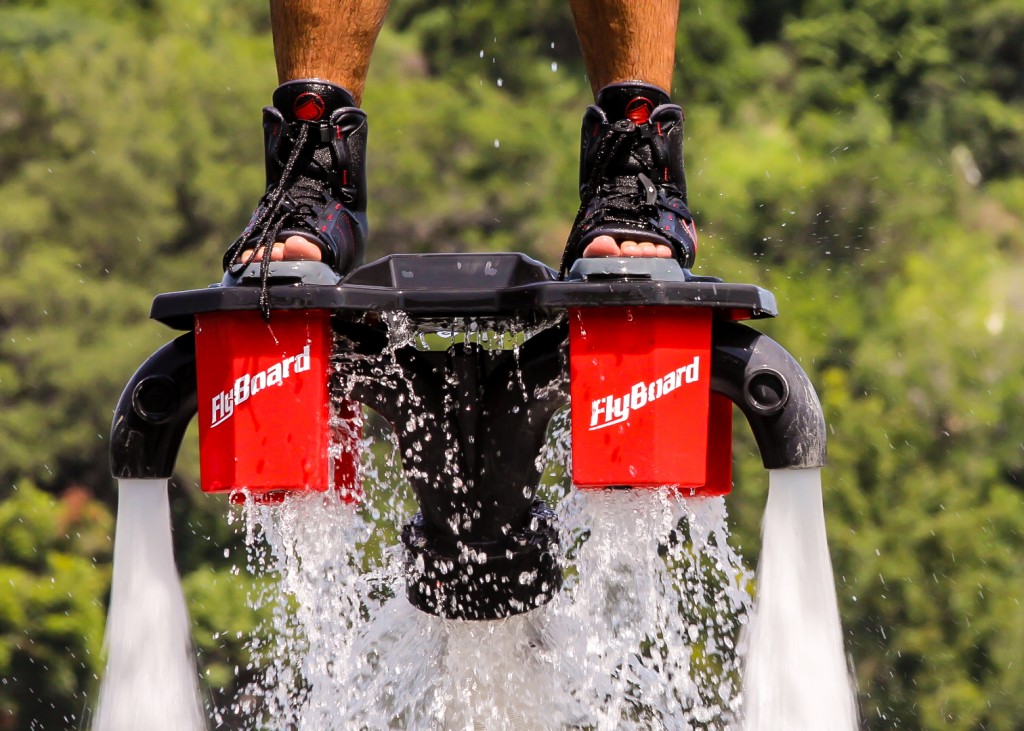 French jet ski racing champion Franky Zapata invented the Flyboard in spring of 2011. Flyboarding has grown popular in the U.S. The balance and ride of the Flyboard is often compared to a snowboard. Photo by Barbi Barbee.

“There is nothing else on your mind, except for what you are doing and just how much fun you are having,” said Damone Rippy, the youngest professional flyboarder to compete in the 2013 Flyboard World Cup at age 15.

To train for these championships, Rippy practices about four to five times a week at Aquafly where he works.

“[There is] a certain training regimen that I have to complete before the day is over and that either comes to landing a certain amount of backflips in the air or doing double backflips or doing a certain new trick, or keep on trying it,” Rippy said.

Because the sport is so new, one of Rippy’s coaches Christopher Vance explained that the community of flyboarders is like a family.

“We have what’s called a flyboard family. Everybody pretty much knows everybody at this point,” Vance said. “The competitions that we go to, we all get together and have fun, we go out and drink and eat together. But when the competition starts, it’s very competitive. Not cutthroat, but everybody wants to win.” 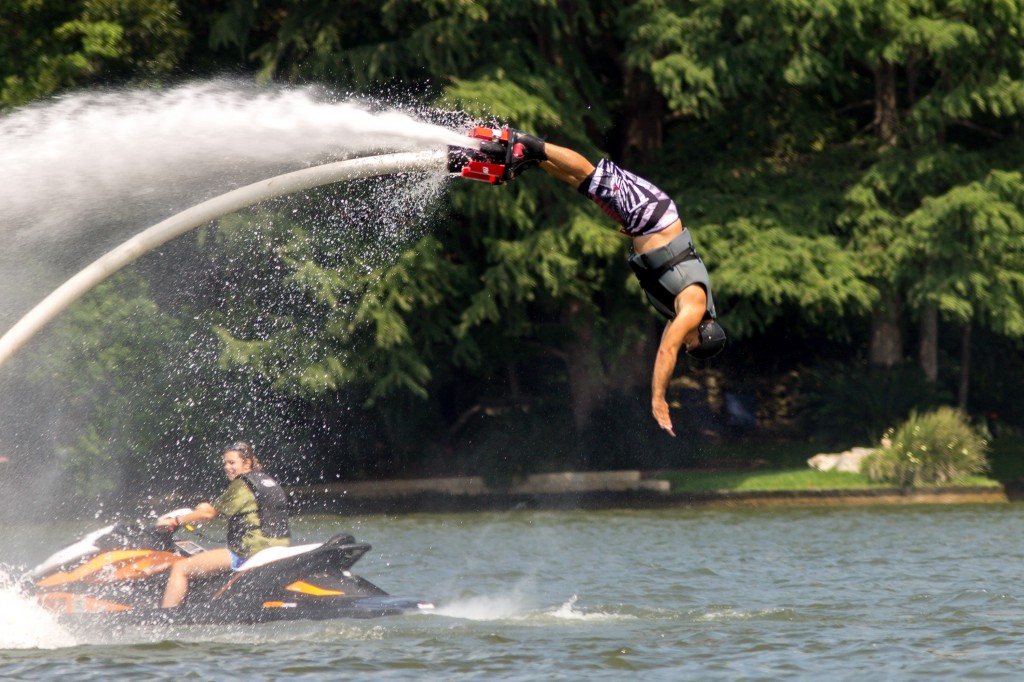 Fly Lake Austin owner Ed Hughes dives under water using his Flyboard, which uses water jets to propel riders to perform a number of trick, such as diving or back flips. Photo by Barbi Barbee.

The first time Hughes flyboarded was January of 2013 when the temperature was about 50 degrees Fahrenheit. He immediately fell in love with the sport after reading about it on the Internet.

Since he opened Fly Lake Austin last year, Hughes has taught people of all ages, ranging from 6 years old to 80 years old, and people who loved sports or couldn’t swim.

Besides the Flyboard, people can try flyboarding on a Jetovator, another water sports accessory that allows the flyboarder to redirect water and propel and elevate into the air.

“The Jetovator is a very similar apparatus. It flies on water power from a jet ski,” Hughes said. “It’s more like a motorcycle than a board that you stand on. It also has to hand controllers that the person on the Jetovator controls the up and down with that. There’s a little more control for the rider on that.”

Hughes teaches with both the Flyboard and the Jetovator. While some people prefer one or the other, most people like using both.

Hughes has seen flyboarding become what it is today and how popular it is — or lack thereof — among Austinites. 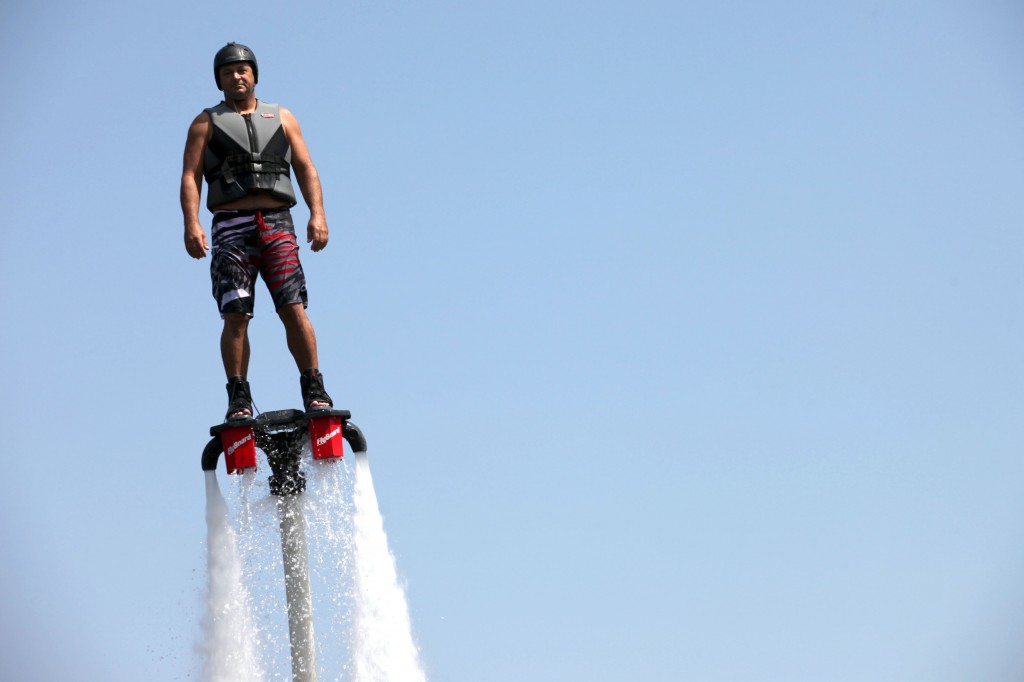 Hughes soars above Lake Austin on the Flyboard. The Flyboard can send riders over 30 feet above water. Hughes uses a 60 feet firehose, which allows him to elevate higher in the air. Photo by ChinLin Pan.

“People are becoming more and more familiar with this,” Hughes said. “Yet every weekend, I see people that say they have never seen anything like this before. Or they’ve only seen it on the Internet.”

Hughes believes some people stray from flyboarding because it appears dangerous or they feel they cannot grasp the Flyboard or Jetovator.

“A lot of people are intimidated by these machines, but they’re easier than wakeboarding and most people are up and flying in two to to five minutes once you get them out on the water,” Hughes said.

Like most sports, Rippy says, people can get hurt, but it also takes time “to learn the techniques and get in the zone.”

Rippy says that his young age helps him avoid injury in competitions.

“I can bend easier than some of the people and I heal very fast when I get hurt,” Rippy said.

For people who are not professional flyboarders, the risk of injury is low, when they are in capable hands of an instructor. Hughes encourages people of all ages to try if they’re interested because “it’s way easier than it looks.”

A Conservationist Approach to Landscaping